Fertigation is applying fertiliser through irrigation and has been used in the United States since the 1960s.

Mr Pile has been working with fertigation for 10 years, designing and building fertigation units to be attached to irrigators.

Farmers who adopted fertigation applied smaller amounts of urea on their paddocks daily or weekly, instead of monthly applications.

They ended up saving money over the year while getting better utilisation, he said.

“It’s used a lot in horticulture and in orchards because fertigation is an ideal way to feed the plants with nutrients as they need it.

“It is about using the ‘little and often' approach. We’re focusing on the nitrogen, but it’s all about growing grass.

"It needs a constant supply of nutrients and by applying it every day those nutrients are better utilised, so over the season you actually end up applying less.”

The industry norm in dairying was to apply 30kg of urea in one application each month, but the fertigation approach was to apply 1kg a day.

It did not need to be applied on rainy days. 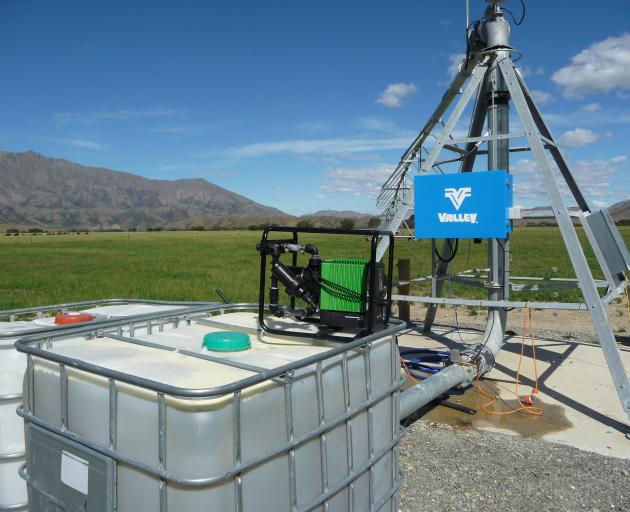 A fertigation pump on cubes developed by Graeme Pile.

“It means the soil biology can better utilise the nitrates, so the grass growing under fertigation has less nitrogen, which means the amount of nitrogen in the cows’ urine is less, so there’s less leaching over the winter.”

The project compared grass growth in replicated trials where solid urea and liquid urea were applied either monthly or weekly.

“What we find is the farmers who use fertigation, the level of nitrogen they need to apply reduces each year because they are producing more clover.”

Fertigation Systems is New Zealand’s only fertigation company and has fertigation units on 41 farms across the South Island, including Pamu’s (formerly Landcorp) irrigated dairy farms in Canterbury.

About half of the farmers were in dairying, about one-quarter each in arable or sheep and beef, plus a couple were deer farmers.

Pamu had been able to reduce its application of nitrogen by 34% over two years of using the fertigation unit, which saved $189 per hectare in urea and $56 per hectare in spreading costs, he said.

“One of the major benefits of fertigation is that you can change the amount of fertiliser you apply depending on climatic conditions and potential grass growth.”