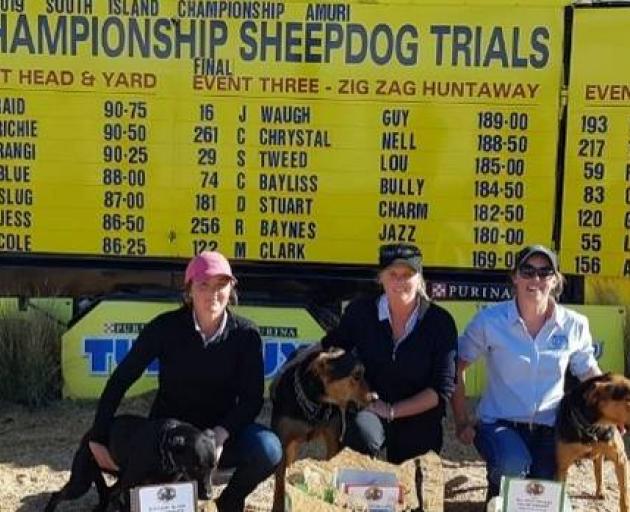 Gisborne's Jo Waugh has won the zig zag hunt at the South Island sheep dog trial championships, the first time a woman has won the event in more than 100 years.

And not only did the 30-year-old and her huntaway dog, Guy, get on the podium, but two other women also joined her in the top seven, clocking up another achievement in the usually male-dominated event.

The South Island Sheep Dog trials were held in Hanmer Springs this week but farmers and shepherds have been competing since the sport first landed in New Zealand in the 1800s.

According to teara.govt.nz, Kiwis began the sport 130 years ago before the first trials were held in the North Island at Porangahau in 1892.

About 300 competitors headed to the trials which was made up of four separate events.

Each event is quickly whittled down to a final seven who spend the remainder of week battling it out. Waugh claimed the trophy in the zig zag competition.

She'd entered the trials on and off over the past decade, and now finally got to take home the silverware.

NZ Sheep Dog Trial Association president Pat Coogan said it was a "significant" achievement which required not only the training of a disciplined dog, but a shepherd who was mentally tough.

"It's truly significant because the competition is damn tough and it's the mental toughness you have to have when you get in that situation."

Coogan said Waugh put up a mighty comeback after coming in seventh after the first round with a score of 92.5, before getting a 96.5 to put her on top of the ladder.

"The run lasts for four to five minutes and you have to be mentally tough to do that."

Waugh's event saw each shepherd stand in a pen at the bottom of the approximate 300m course as their dog leads the three sheep, in a straight line, through a zig zag area.

The shepherd's control their dogs through whistling and verbal instructions but can be penalised if either the sheep or the dog put a foot wrong.

Waugh, a shepherd on two farms in Matawai near Gisborne, said she was proud to be the first woman to take the title.

"The competition is quite hard and this is the first time that I've managed to get in ...it's pretty surreal to be honest. It's a lot of hard work."

The competition was often a natural progression for shepherds who needed a disciplined dog on the farm.

"It's quite a good challenge. You're with your dogs all day, every day and when you get into a competition it's quite rewarding when you go well.

"You work hard training your dogs up to a standard to when you can start winning stuff."

* The North Island and National Sheep Dog Trial Championships will be held in Kaikohe from May 27.