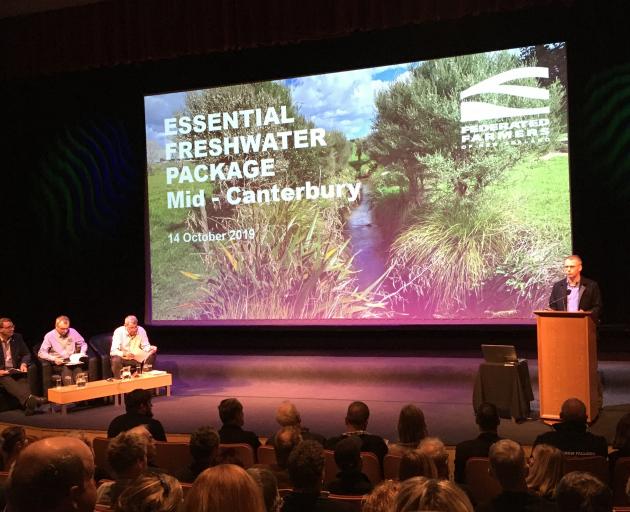 It was one of many analogies Mr Forrest used at a public meeting last week at the Ashburton Trust Event Centre to describe the Government's 115-page essential freshwater proposal.

The meeting, led by Federated Farmers Mid Canterbury provincial president David Clark, drew almost 500 people. The majority were farmers but there were also industry representatives, rural and urban business owners, new and outgoing district and regional councillors and members of the community.

''It's not just a discussion document,'' Mr Forrest said.

There was also concern over the lack of cost-benefit analysis, the short six-week timeframe for submissions (extended by two weeks after pushback), four other significant submissions happening at the same time, the fact there will be no hearings for the proposal, and Cabinet, not Parliament, will decide what will be put in place.

The panel went through the proposals and their concerns point by point, as well as answering questions.

Mr Clark said no economic analysis had been done on the proposal and how it would affect communities but, in the Action for Freshwater discussion document on page 86, there was reference to an analysis, done by Environment Canterbury's head scientist Dr Tim Davie in 2017, using similar cutbacks for the Waihora Selwyn Zone.

Mr Clark said the ECan report stated: ''land-use change of this scale would have very substantial implications for the catchment. There would effectively be no irrigation or intensive land use in the catchment, and forestry or extensive grazing would dominate the landscape ... resulting in fewer farms, reduction in employment, losses of economic value in land, significant loss in equity and, depending on the time scale, bankruptcy for those with debt that could not be managed through the transition.''

''That is why we are very concerned for the future of Mid Canterbury,'' Mr Clark said.

It had ''huge implications for our community'' and would affect the business owners and employers in communities such as Mid Canterbury as much as it would hurt farmers.

He said trusting those in power was not an option.

The proposal, for which submissions close at 5pm on October 31, was the only chance for farmers and those in the community to be heard, he said.

It was in the farmer's interest to care for their land and most farmers in Canterbury were already involved with the existing Canterbury Land and Water Plan, Mr Clark said.

A blanket nationwide rule was not the answer.

Mr Copeland said Federated Farmers represented the long-term ability of landowners to profitably and sustainably produce food and fibre, regardless the type of productive land use.

He said that under the proposal, farmers' flexibility to choose how to farm their land would no longer exist, without permissions.

He said the primary sector was an important driver for local and regional economies as well as the national economy.

''Farmers and growers rely on service industries to produce high-quality and high-value products and to transport, process and market them to discerning customers in international markets.''

With a current GDP of 11%, it was more likely 15% when support industries such as mechanical maintenance were taken into account.

''What is going to replace this income and how can we keep our communities vibrant?

''It's not fully thought through.''

Mr Clark said facilities such as the event centre and Lake Hood exemplified the economic transformation that happened as a result of the district's farmers' flexible land use and ability to react to markets post 1990s.

Member of Parliament for Rangitata Andrew Falloon, also at the meeting, said if farmers had been involved during the process ''alarm bells wouldn't be ringing now''.

There were major flaws and unintended consequences in the proposals.

''The lack of economic modelling released by the Government shows that they're not interested in having a meaningful debate.''

Farmers putting in submissions on the essential freshwater proposal can use the template provided on the Federated Farmers website at FedFarm.org.nz, but should use their own words and speak about their farm operation and any impacts of the proposal.

Included in the Federated Farmers community meeting was a glimpse of what they considered good aspects of the freshwater proposal, as well as those that were not so favourable.