No rise in calls for help 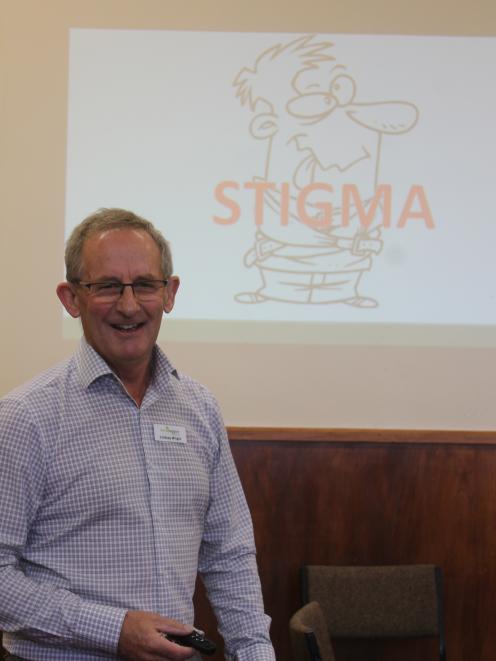 Lindsay Wright delivered a GoodYarn workshop to rural professionals in Invercargill on Friday. PHOTO: JANETTE GELLATLY
Despite more stressors in the rural sector, the Southland Rural Support Trust (SRST) has not noticed any increase in calls for help from farmers, trust co-ordinator Lindsay Wright says.

Mr Wright said from his "unquantifiable observations", the trust had not received any additional requests from help from farmers this year, compared with previous years, which surprised him.

On average, the trust received about one call a week, and that figure was consistent with other years. He said the rural industry had challenges year on year, but there seemed to be much more facing farmers at present, including extra rules and regulations, compliance requirements, which they were trying to get their head around, and the erratic spring.

He thought perhaps given the years the trust had been promoting the various ways available to help farmers, progress was being made and farmers were more willing to talk about their issues or ask for help rather than going through the trust.

"I cannot quantify why are we not getting the calls if it so tough out there.

"Maybe they are so busy with other stuff and haven't got the time but I am just surmising.

"It is just an interesting observation and we are still getting calls but not in a rush."

In addition, groups such as Ag Proud NZ, the Southland Wellness Action Team (SWAT) and GoodYarn were also there to provide farmers with help, advice and resources or just a listening ear.

Mr Wright is a founding member of the Good Programmes Trust, which manages GoodYarn. He ran a GoodYarn workshop in Invercargill last Friday and one in Gore the previous week, both of which were fully subscribed, with about 20 people at each.

He said the latest workshops were held in response to SWAT identifying a need from rural professionals who were finding higher levels of stress among farmers.

"Many want to upskill themselves around having meaningful conversations with farmers.

"They want to recognise what stress looks like, and how do we have that conversation and source assistance.

"The feedback from the workshops we get is very positive.

"It [the workshop] just seems to strike a chord at the right level for people to get something from it.

"It gives them [rural professionals] the confidence and knowledge to be able to deal with situations, as they have noticed the battle is a bit tougher out there this year."

Ag Proud NZ will be hosting former policeman and life coach Lance Burdett, who will be holding "Awareness, wellness and resilience" workshops in Gore and Balclutha on December 5 and 6.

In addition Westpac is bringing John Kirwan south to speak at a couple of events in December, but details have yet to be finalised.

The Thomas Green Public House and Dining Room, in Gore, is hosting a fundraiser for the SRST on November 22 with a live auction, buffet and entertainment by the 2019 New Zealand Country Entertainer of the Year and Trans Tasman Entertainer of the Year, Jaydin Shingleton, and 2018 Gore Gold Guitar winner Arun O'Connor.