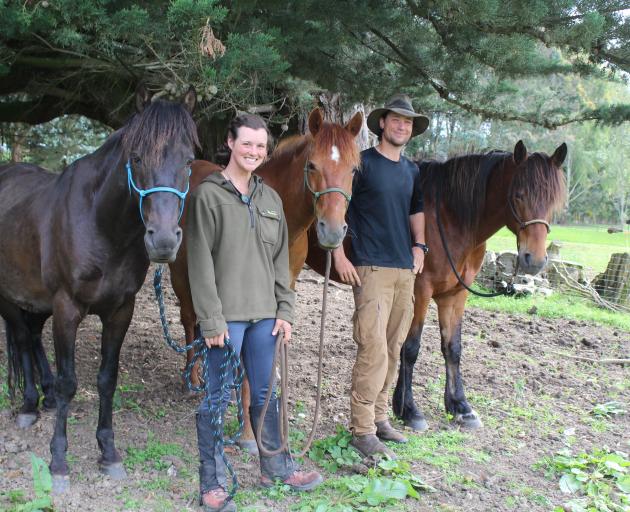 Three Kaimanawa horses and their humans, Jess Mullins and Bijmin Swart, are one month into their country-long horse trek. Photo: Laura Smith
It is an ambition of many to travel the length of the country, but wild horse is not typically the transport of choice.

In 2018, during the annual muster of Kaimanawa horses near Taupo, Jess Mullins and Bijmin Swart took on three wild horses.

The muster occurs to maintain good health within the population and protects fragile ecosystems that are unique to the Moawhango Ecological Zone.

Unfortunately, not long after they took him on, one of the three horses died of illness.

Mr Swart said patience and time was required to earn the horse’s trust, especially when the small herd increased by one when they took in a rescue horse that had to be rehomed; he was also a Kaimanawa.

Having spent a long time with horses, both in their spare time and while guiding treks, the pair decided to take a break and live simply. Hence, the idea of the Re-wild Project was born.

Mr Swart said it was about "reconnecting to a simpler state of being."

Starting in Glenorchy in November, the group made their way down to Invercargill last week and have covered more than 500km so far. With the recent rain, they typically spend three days travelling and two days resting.

Kaimanawa horses are hardy and their experience of living in a wild environment means they are capable and strong, Ms Mullins said.

Mr Swart said, "Every single challenge we put in front of them, they can just do it."

The three geldings were still acclimatising to life around humans, but the pair said they were doing really well so far.

They said everywhere they had been there had been people wanting to share stories, their homes and resources.