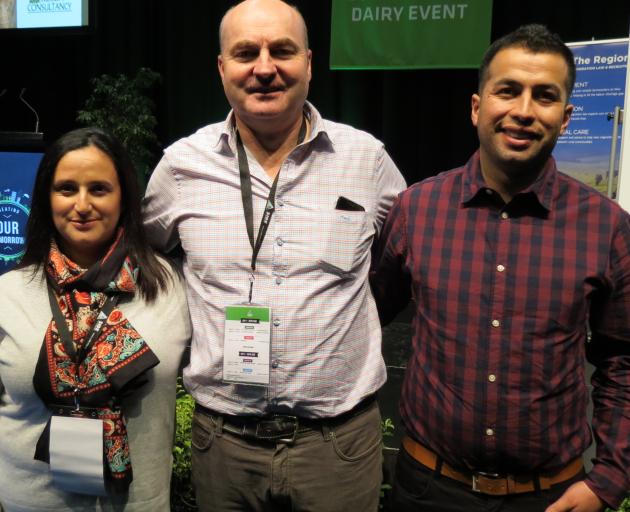 Dairy farmer Maka Morales, of Mokotua, talked about her and husband Miguel Ortiz’s career in the industry, during the BrightSide portion of the South Island Dairy Event in Invercargill, last week. Roslin Consultancy’s Alex Hunter (centre), of Alexandra, provided guidance during their journey. Photo: Yvonne O'Hara
''If we don't have young people who are passionate and who see a future in the sector coming through, we won't have a future.''

Mr Topham said the positive response to BrightSide, proved there was a demand for similar sessions in future events.

The speakers included sharemilker Maka Morales and husband Miguel Ortiz, who came from Chile in 2011, with no dairy experience, no assets, and no English.

Through hard work, they gained experience, moved to Gore and are now contract milkers, wintering 860 cows with a 400,000kgMS target at Mokotua.

They intend to progress further and build assets and gain equity by 2023.

Mrs Morales first arrived in Waimate in 2000, and started working on a dairy farm, with no experience and no English.

Husband Miguel and daughter Ignacia (now 15) remained in Chile until 2011 and 2012 before there was enough money to bring them over.

After hard work, they moved to a dairy farm in Gore as contract milkers, and also gained residency in 2017.

With help, they developed a five-year business plan that would see them build equity and own land by 2023.

They borrowed money from their Gore owner who saw their potential and recognised their dedication, and they bought equipment through hire purchase.

The BrightSide session was organised by committee member Amy Johnston, who said she was really happy with its success, as well as the positive response from audience members.

Also speaking at the event was Roslin Consultancy Ltd consultant Alex Hunter, of Alexandra, who offered advice on career progression including the importance of having a supportive team, including a bank manager, consultant and accountant.

He advised farm workers to not to under-estimate themselves.

''The industry is short of really good people and you are going to be adding value to your owners.''

Mr Hunter said it was important that young people found the right job that utilised skills and experience and allowed them to build a financial base.

Genesis Group is a consultancy provider that empowers leaders in agribusiness.

Mr Robertson said while it seemed there was negativity in the industry, that also meant great opportunities for younger people.

While asset values, including land, were declining, it meant it was cheaper for young people to buy.

''If you find the right group to work with, any structure will work.