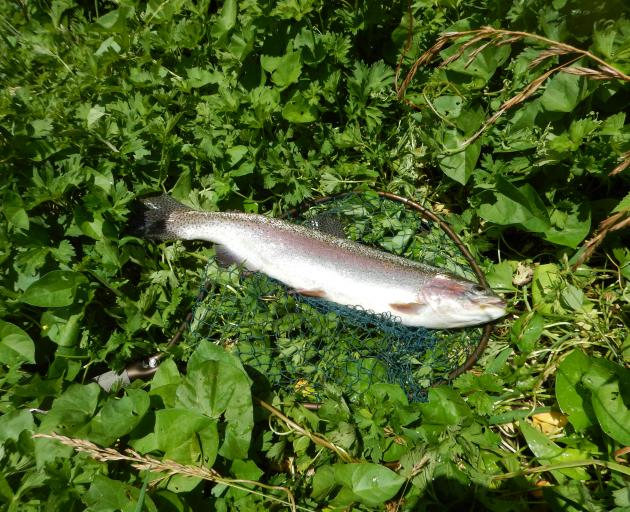 A rainbow trout. Photo: Mike Weddell
The recent extreme weather events have been extreme in more ways than one.

Western parts of Otago and Southland had all the heavy rain while to the east there has been very little.

Consequently, the rivers to the east are low and fishable while those to the west are dropping but are a few days away from ideal levels.

The Waitaki is still very high and will take a while to drop. Its tributaries from the Hakataramea upstream are still high too.

Coastal streams in North and East Otago are very low now; so too are the Taieri and Pomahaka. That gives plenty of choice of fishing spots.

Willow grub will make an appearance soon if they have not done so already.

The Mataura is approaching ideal level — hopefully it will stay there for a change. Once it drops below 20 cumecs at Gore it becomes easier to wade and can be fished comfortably.

Trout can be spotted nymphing in the ripples if the light is right if there are no rising fish. If the weather is mild and calm a fall of spinners can be expected mid-morning.

As mouth-watering as thinking about this fishing is, I cannot take advantage of it for a few days as I am in the North Island in Waikato.

I did force myself to out fishing a couple of days ago and hope to do so again tomorrow.

We were staying on the farm of my son’s future in-laws and not far away was a small stream called the Kakahu.

Despite a night of thunder and lightning it was clear enough to fish the next morning. I would have fished it anyway as I was desperate to get out to fulfil my promise to provide trout for tea.

It was hot and humid as I bush-bashed my way downstream for half an hour before fishing back to the car.

I think I will take a machete if I fish there again; it was harder than fishing the West branch of the Tokomairaro where trees form a tunnel around the river.

There were some lovely runs and the water was clear enough to see the bottom.

However, I did not see a fish until I was nearly back to the car after two hours.

It was dropping slowly downstream and rose a couple of times, but as soon as I moved my rod it took off at high speed.

But lo and behold: a few metres upstream there was a shadow moving from side to side.

I plonked my trusty hare’s ear nymph a metre or so above it — the fish swung to the left and I tightened into a fat rainbow trout of 1.7kg.

After an epic battle it came to the net and my reputation as a tea provider remained intact.