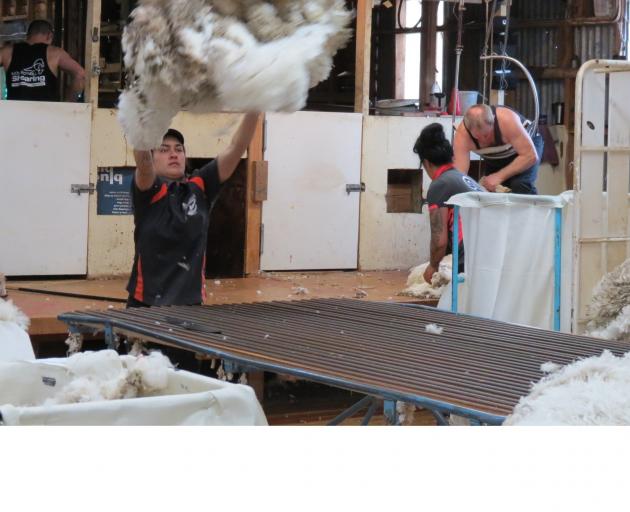 Woolhandlers are in short supply at the moment, but some southern contractors are employing the staff they need from the North Island as their season finishes. PHOTO: SRL FILES
As the school holidays ended, many shearing contractors were struggling to replace their "uni power".

New Zealand Shearing Contractors Association president Mark Barrowcliffe said there was a shortage of staff, particularly woolhandlers, as many of those who worked in the sheds returned to university or secondary school.

"We have a lot of students in the North Island, which is fine for us as we are finishing now [the season] and then they go back to university.

"In the South Island they [contractors] have started to get busier and their use of ‘uni power’ does not quite line up as well."

In previous years, contractors could fill the void by employing woolhandlers from overseas who were in the country as tourists.

However, they are no longer available because of Covid-19 restrictions.

Mr Barrowcliffe was interested to see improved communications between contractors who were encouraging their staff to move to other locations where they were needed.

"Everyone cares about the industry and don’t want to see any sheep or workmates suffering, so if they can help they will."

Some staff were also happy to jump on to a plane to go south to help out for a few weeks.

The association brought in 27 shearers from the United Kingdom, but problems with space availability in Managed Isolation and Quarantine units meant it was not able to bring in more.

Since the association increased its members’ shearing pay rates by 25% in 2018, more chose to remain in New Zealand rather than head to Australia to work.

"We did that a couple of years ago as we could see the shortage looming and now more staff remain in the country, which helps to alleviate it."

Contractor Jason Davis, of Davis Shearing Contractors, in Balclutha, said he had been facing a shortage of shearers, and in particular shed hands, as students returned to their studies.

However, falling wool returns meant farmers were economising and requesting fewer woolhandling staff, and that meant he did not need to supply as many.

He had recently managed to employ some shearers and shed hands from the North Island, but he would be happy if he had access to more.

Jamie McConachie, of McConachie Shearing Ltd, in Winton, said he lacked shearers but what concerned him was the shortage of woolhandlers.

"We used to get about a quarter of our woolhandlers from the United Kingdom, but they have not been allowed in to New Zealand to work."

In the meantime, he had to replace five women who returned to university and secondary school.

As the North Island shearing season wound down, he hoped he would be able to employ more staff.

Rebrand wool handling as a skilled job and bring in immigrants to do the work. They'll do it for !ess wages and work all the hours God sends without the need for those pesky holidays or sick leave.