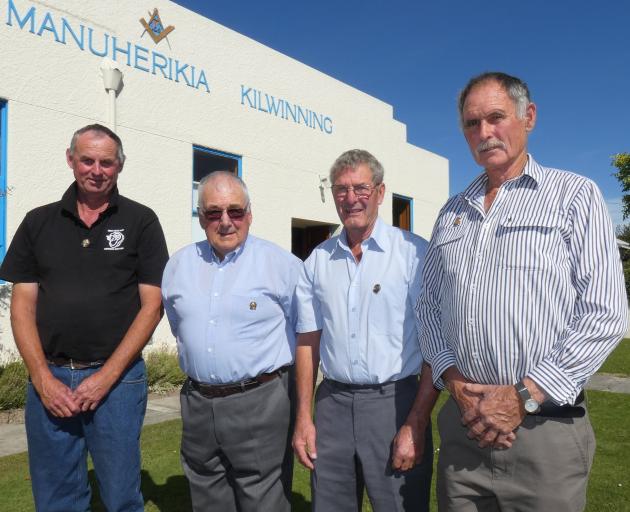 Awarded New Zealand Merino Shearing Society life memberships are (from left) Greg Stuart, of Omarama, Don Moffat, of Queenstown, Allan Paterson, of Gimmerburn, and John Nelson, of Earnscleugh.PHOTO: SIMON HENDERSON
Family tradition and fine wool came together at a meeting of the New Zealand Merino Shearing Society as four stalwarts were awarded life memberships during a ceremony at the Lodge Manuherikia Kilwinning in Alexandra on Sunday.

Mr Nelson first came as a helper to shearing shows in the late 1960s.

He started competing in shows before becoming a committee member in 1983, a role he had continued to the present day, Mr Bell said.

He enjoyed the shearing life, and since 1991 had carried out judging duties at the annual New Zealand Merino Shears event in Alexandra as well as other competitions in Otago and Southland.

Mr Paterson carried on a family tradition when he became a committee member and shearing referee and chief judge of the New Zealand Merino Shears.

The family business, Armidale Merino Stud, had been a supporter of the society for many years, Mr Bell said.

Mr Stuart joined four generations of shearers when he began coming to the show as an 11-year-old.

He began competing in the mid-1980s and was now a judge.

Mr Moffat had about 60 years of woolhandling under his belt and had been a loyal committee member since 1994, Mr Bell said.

Mr Moffat talked about how the "man from Dalgety" used to visit to explain woolhandling when he was at school.

He had also been recognised by the Otago Shearing Society and the South Island Shearing and Woolhandling Society — being awarded a life membership of both.