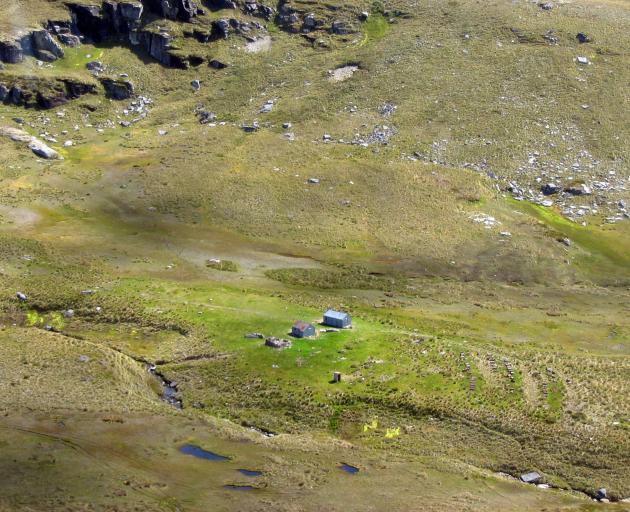 The Blue Lake huts on Glenaray Station, 38,000ha of which could become public conservation land under tenure review. PHOTO: DEPARTMENT OF CONSERVATION
Access is at the forefront of submissions on a tenure review of New Zealand’s largest high country station.

Many of the more than 30 submissions on a preliminary proposal developed for Northern Southland’s Glenaray Station, home to more than 60 threatened species and 15 rare plants, are focused on access.

Under the preliminary proposal, 38,000ha would become public conservation land, 13,400ha freehold subject to conservation covenants, and the remainder of the 62,000ha station freehold without conditions.

Tim Dennis, who has built trails including the Alps 2 Ocean and Clutha Gold Trail , supported the proposal but had questions over access points.

Others also raised concerns over access, be it for trampers, hunters or clubs.

The Game Animal Council asked that provision for hunting vehicles was secured, as part of its submission.

"Hunting access ways to public conservation land should be established, maintained or enhanced, and they need to be in a form suitable for hunters carrying firearms and accompanied by dogs."

The Otago Conservation Board said the proposal related to the long-term concept of a Remarkables National Park.

The Central Otago Environment Society said, while it supported opening land for public access, the proposal also needed to be "reviewed" to protect the land.

The Commissioner of Crown Lands Craig Harris said the majority of submitters supported the proposed conservation areas, but raised concerns about whether some of the conservation covenants provided adequate protection of inherent values.

"We were pleased with the number and quality of submissions received and will consider this valuable feedback when developing the substantive proposal.

"The submissions highlight the significant interest people have in this special station, which has been farmed by the lessee’s family for five generations."

The commissioner would now consult the Director-general of Conservation and the lessee to develop a substantive proposal.

The 62,000ha station in northern Southland, made up of the Glenaray and Whitecomb pastoral leases, is one of 28 Crown pastoral leases in tenure review.