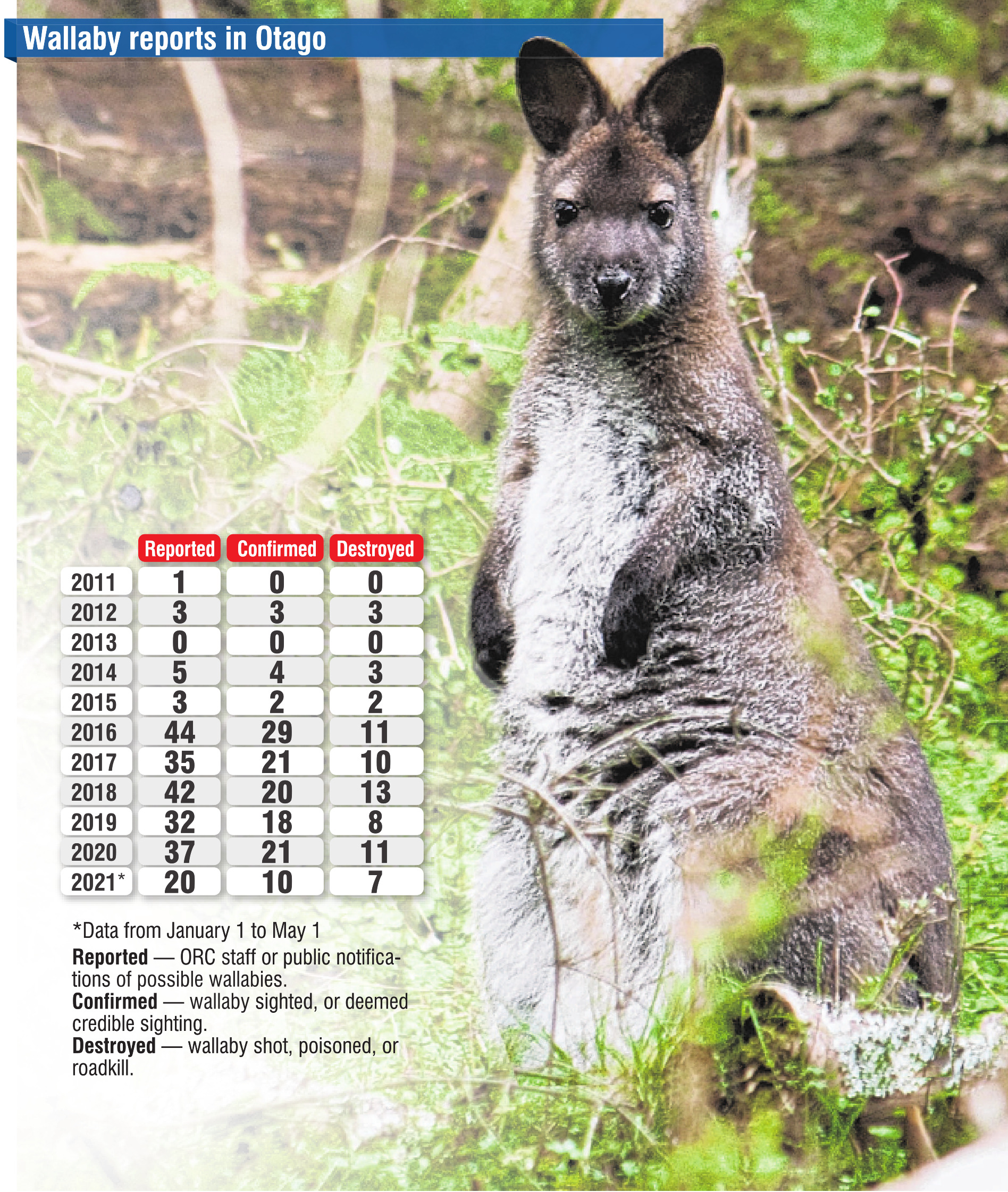 Wallaby control efforts in Otago are being ramped up this month.

With funding from the $27 million national wallaby eradication programme, the Otago Regional Council is targeting the Kakanui Mountains, the Shag River (between Kyburn and Dunback), the Dunstan Mountains and from the Lindis Pass to Lake Hawea, using ground and aerial-based contractors to collect data on where wallabies are present, and destroy those sighted.

ORC biosecurity manager and rural liaison Andrea Howard said the long-term goal was eradication — and the council was optimistic it could be achieved.

"We’re in the privileged position of collecting information about the extent of the problem, rather than having to try and contain the problem," Ms Howard said.

"We’re still at the stage where eradication is possible."

While the Bennett's wallaby remains in a "containment area" in South Canterbury, where populations were established for recreational hunting in the 1870s, the animals have been steadily increasing in density and geographic range.

Outside the containment area, they have been found as far north as Marlborough and as far south as Flagstaff, and are also known to be in the Mackenzie and Lake Hawea areas.

The ORC launched its wallaby programme in 2016, when there was a sharp rise in numbers in Otago, but had "rapidly" increased its efforts after receiving $382,000 in Government funding this year, as part of the national wallaby eradication programme.

Most of the ORC’s funding for 2021 was being allocated to this month’s surveillance and control activities in North Otago and Central Otago.

It was very labour-intensive work — "literally like trying to find a needle in a haystack" - and contractors used various methods, including indicator dogs and thermal imaging, Ms Howard said.

The main focus was to gather information to help inform a national strategy.

There are now 21 cameras installed in Otago to monitor wallaby sightings remotely, and help identify where and how they are getting out of the containment zone. The ORC is working closely with Environment Canterbury (ECan) on this work.

Both councils were "heavily reliant" on the public to report sightings online at reportwallabies.nz, and destroy wallabies on their land, if possible, Ms Howard said.

Environment Canterbury (ECan) is spending $1.3million and baiting 28,000ha this year to address wallaby problems in the province.

Wallaby programme lead Brent Glentworth said there were "hundreds of thousands of wallabies" in the 900,000ha containment zone. Outside it, there were three known breeding populations in Canterbury - in Mackenzie and on the south bank of the Waitaki River.

ECan has been involved in wallaby control since 1992, when the South Canterbury Wallaby Board was disbanded.

Wallabies were now spreading at such a ratethat, if councils did not take advantage of Government funding, the problem "may become uncontainable", Mr Glentworth said.

ECan and the ORC had been working together since the mid-’90s, and their relationship had been strengthened as they tried to achieve those goals together.