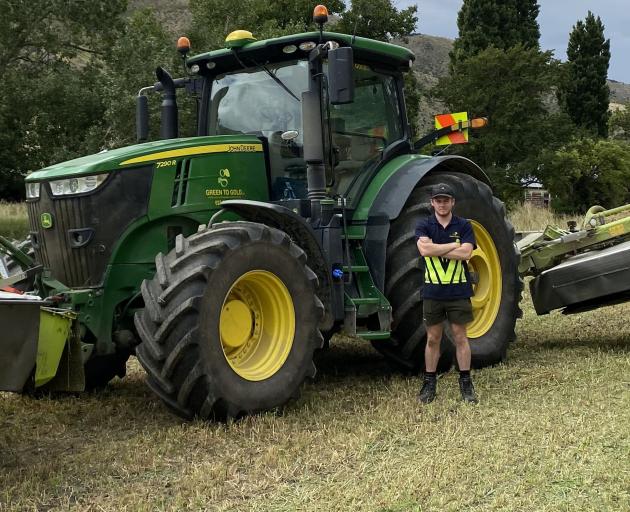 Lincoln University student Andrew Bateup, pictured near Hawea Flat, is pleased he came down to work for Green to Gold Contracting, Wanaka.PHOTO: ANDREW BATEUP
The recent rains and warm conditions mean a "second spring" for parts of the region, says contractor Richard Woodhead.

He said farmers in many areas had experienced a dry spring.

"Everything dried up and then it rained and starting growing again, like a second spring."

Maniototo contractors reported the area was starting to dry out before the rain arrived in the new year, and then they got flooding in some parts.

"Now the contractors have got plenty of work on as they have big crops and lots of them."

Earlier in the season it had started to dry out in the Upper Clutha, but more recently it has been cooler and damper than usual.

When talking to Southern Rural Life last week, he said Wanaka was sitting on 8degC.

They had started to cut lucerne.

"The crops are looking pretty good, and greener, and combines are starting to harvest."

The Southland contractors he had talked to were pleased with how well the crops looked.

"They are having a great run and the grass has exploded down there."

In addition, despite pre-season concerns about finding workers, all those he talked to had enough staff.

However, just because the season looked good now and the contractors were busy, it did not mean it would stay that way, as forecasters were still predicting a hot, dry summer.

University students had earlier been invited to work for contractors to meet an expected shortfall for labour during the season.

Lincoln University student Andrew Bateup, who studied for a diploma in agriculture and farm management, started working for Ferg MacDonald of Green to Gold Contracting, Wanaka, after his exams in November.

He comes from a farming background in the Waikato and put his hand up to go contracting as he had heard about the expected staffing shortage.

Since then he has been mowing grass and doing some grain harvesting before going back to university.

"Everything is flourishing and I quite enjoy it down here.

"I was looking for a change, something different, and this work is completely different compared to up north.

"It is a great company to work for, a great environment and great scenery and you don’t get a much better office to work in."