Willow grubs may be a bonanza for anglers 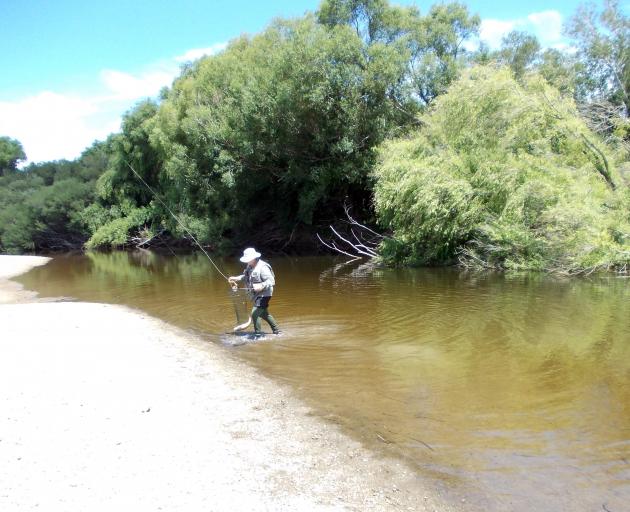 Murray Smart used a willow grub to catch a good-sized trout on the lower Taieri River. Photo: Mike Weddell
Over the past few days, river and stream levels have plummeted except for western Southland and the Clutha.

The flows in some streams have dropped more than 50% which means that most waters are at a good, fishable level. All we need now is a period of settled weather to set us up perfectly for the Christmas holidays, which are not too far away.

A reminder of the sort of fishing to expect over the summer was seeing the number of red blisters on willow leaves which contain the developing larvae of saw flies which are generally known as willow grub. With continued warm weather they will soon start dropping from the trees.

As we know, many of these grubs drop on the water where trout soon latch on to them as they form a continuous supply of food for several months. When trout feed on willow grub it provides either a bonanza for trout fishermen or that alternating with periods of intense frustration.

This frustration arises from trout feeding flat out at the surface of the water where they are easily seen, including big fish which are rarely seen at other times, but at times are seemingly impossible to catch.

When fishing for trout feeding on willow grub the fly fisher needs to be persistent, the 10th cast at a fish, which seems no different to the previous nine, may produce a fish. The other factor is size of fly. I use a size 16 dry fly hook on which to tie my pattern which effectively is yellowy olive thread wrapped along the shank and round the bend of the hook. It seems counterintuitive to use such a tiny fly when casting at a big fish but it works a fair bit of the time which is a high strike rate as far as willow grub fishing goes.

Landing a fish once it is hooked is another thing, as fish will often make a dive for the roots of its favourite willow tree. As the saying goes, better to have hooked and lost than not to hook at all.

Sometimes trout will do the right thing from the angler’s point of view as demonstrated by a lower Taieri trout that took my willow grub. It was lying close behind a pile of branches left by a high flood and there was a bush immediately downstream. Very obligingly it swam out into the middle of the river and cruised up and down until I was able to net it. There, securely fixed in the jaw of a 3.5kg trout, was the tiny fly.

If the stream you are fishing on a particular day does not seem quite right due to water conditions or lack of feeding trout, have a plan B. I fished the Mataura on Sunday. It was bit misty and there were few fish to be seen. A move to the Pomahaka proved to be the right thing to do as it produced a few fish.