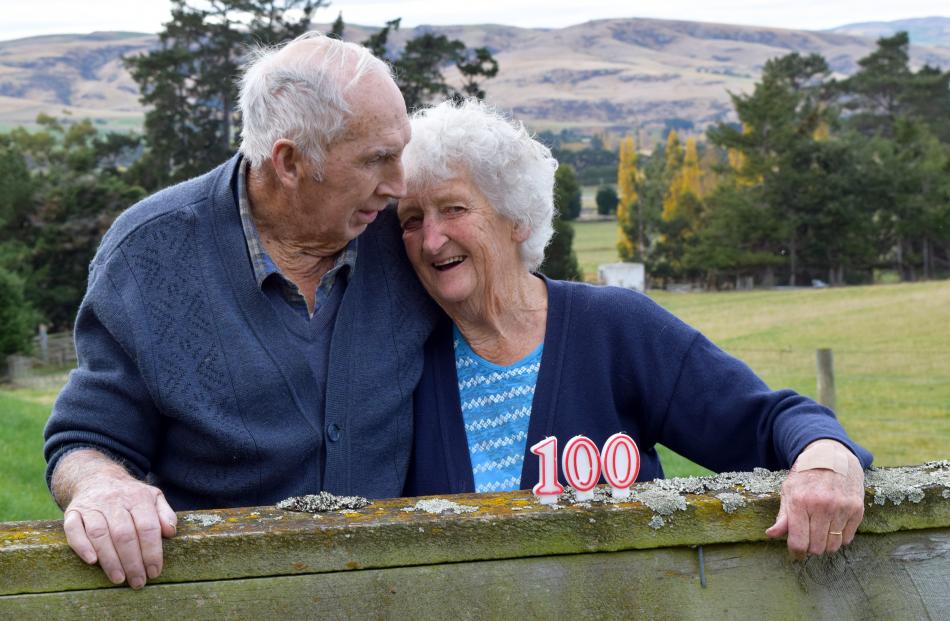 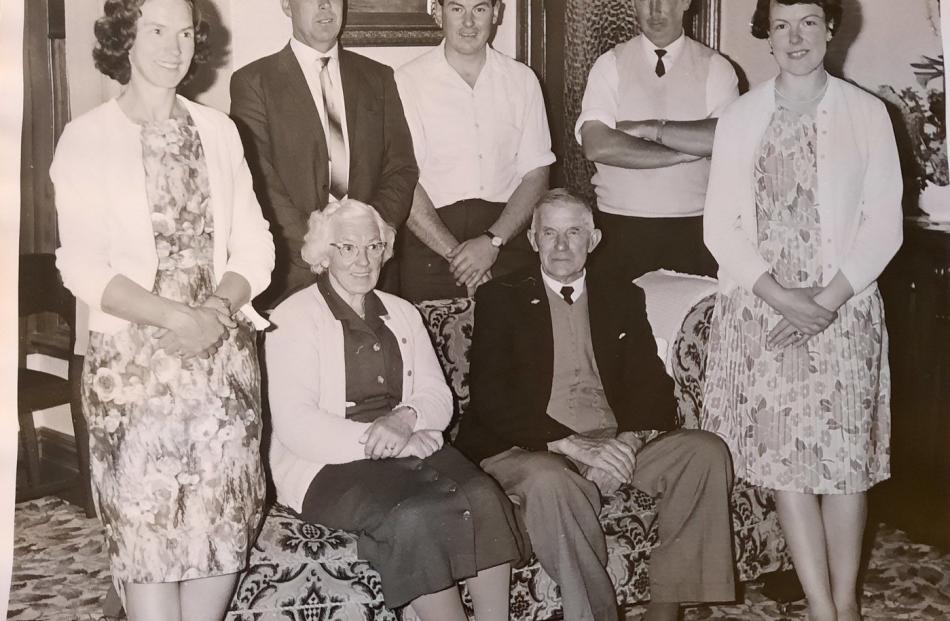 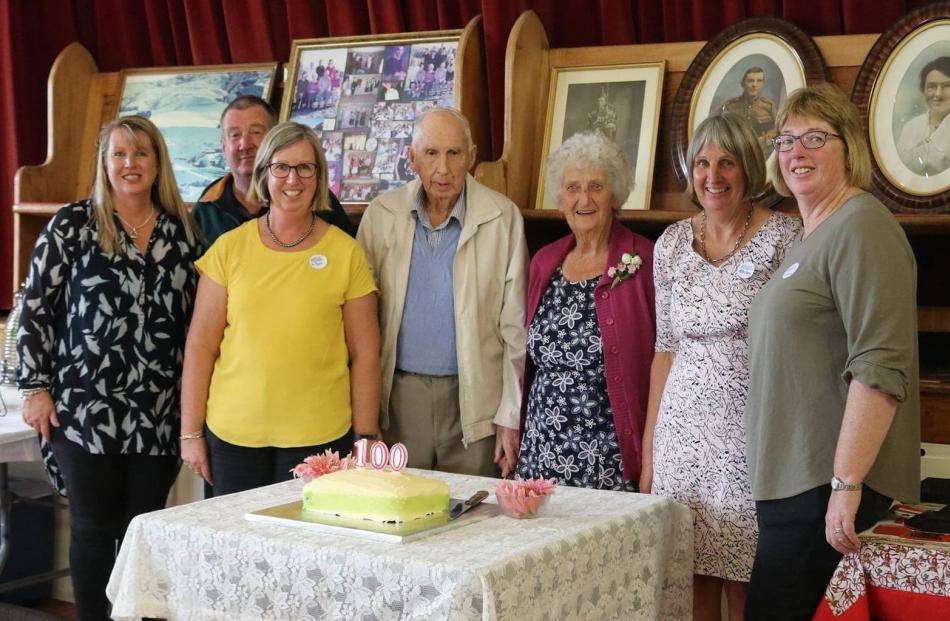 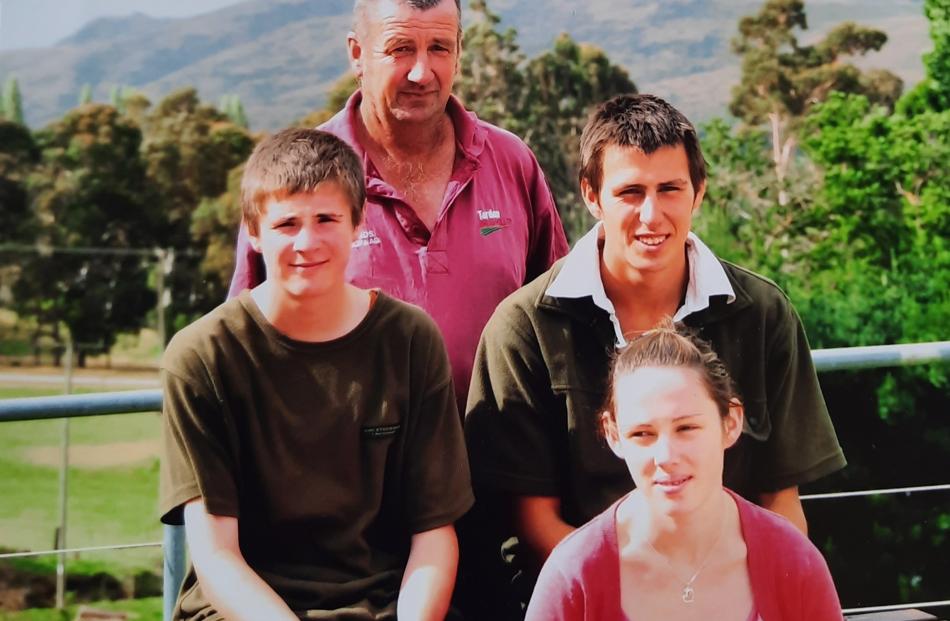 Allan Frame and his children (from left) Graeme, Matthew and Lisa.

The Frame family recently celebrated 100 years of farming Burnbank in Teviot Valley. Shawn McAvinue talks to Bill and Gwenda Frame about how four generations have transformed the land from an unfenced block covered in gorse and rabbits to a productive sheep and beef farm.

A blanket of snow covered the land when Bill Frame was born on the sheep and beef farm Burnbank in Teviot Valley, on New Year’s Day in 1932.

When the snow melted, rabbits covered the farm in Dumbarton, near Ettrick.

As the baby boy grew, so did the rabbit population, and a dream was born.

The boy counted down the days until he could leave school, aged 14, to make his fortune rabbiting.

Rabbiting was easy money, he said.

The dead rabbits needed to be gutted, their legs platted, and then be left covered at the front gate for trucks to pick up to skin in Alexandra or Mataura.

The rabbiting dream was shortlived.

The farm had changed a lot since Mr Frame’s father Arthur first stepped on the land.

Arthur returned to Otago after serving as a sapper, building bridges in Europe in World War 1.

On his return in 1921, he leased Crown land, about 800ha, a mostly unfenced hill country block of Moa Flat Station, as part of a soldiers’ ballot programme.

The only accommodation on the property was a musterers’ hut.

The land was covered in broom and gorse and overrun with rabbits.

Before serving, Arthur worked as a rabbiter near Oamaru, so he began making money from the land by selling rabbit skins.

"He knew the game of rabbiting. Dad always said it was the rabbits which saved him — he got more for his skins than he did for his wool."

After a brief stint farming merinos, the family decided to farm only Corriedale sheep, a decision which remains today.

Bill said the Corriedale breed was selected for its steady wool price, which continues today, and because of the breed’s prevalence in the area.

"The whole district was Corriedale."

Most farmers had moved away from Corriedale and many now farmed merino.

The family had milked cows on the farm for personal use and to sell the cream for processing in Milton.

As family members left the farm, the herd dwindled to a single cow, and the tradition stopped about five years ago.

The farm expanded when Bill’s parents bought a neighbouring orchard block in 1939 and spent 700 pounds renovating the house on it, including a new roof and two new rooms.

The dairy farm no longer remains but Jack’s son, Ian, works as a contractor and lives on the property.

Bill left the farm in 1950 to do his compulsory military training in Burnham, aged 18, and returned to the district to shear between 1951 and 1956.

He married Gwenda Paterson, of Beaumont, in 1958.

They had five children: Allan, Shirley, Pamela, Margaret and Diane.

The couple bought the farm in 1962 and vowed to continue his parents’ hard work of improving the land and stock.

The farm had seen some tough times, including a drought and flooding in the 1960s.

A swollen Langlea Creek had damaged fences and flooded the original home, forcing the family to move to the woolshed until the floodwaters receded.

Branches floating in the floodwater smashed windows in the house, Bill said.

Consequently, a new house was built on a different site on the farm in 1984.

In the late 1980s, they bought a neighbouring 12ha property, The Moa Seed Farm.

Allan returned to work on the farm in 1979 and entered a partnership with his father in 1990.

"Farming is in the blood," Gwenda said.

About 70 friends and family, including Bill’s only surviving sibling, his younger brother Donald, of Nelson, celebrated the centenary in Ettrick Hall on April 10.

"It was great to all be together," Gwenda said.

The couple had been accepted in the Century Farms awards programme and would attend an award dinner next year. Bill said he felt fortunate to be able to celebrate the centenary.

"We’ve been a happy and healthy family right through."