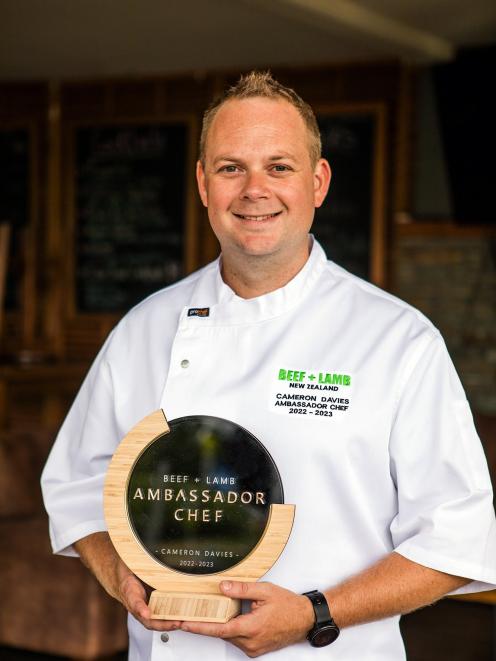 Hopefully in his new role, he doesn’t have to serve to Paris Hilton again.

He owns and runs restaurant The Fat Duck in Te Anau with his fiancee Selina Wright, and has been named as a Beef + Lamb New Zealand ambassador chef for 2022 and 2023.

"I was stoked, over the moon, really excited — I wasn’t expecting it."

Before the couple bought the gastropub in June 2016, they both worked on private yachts in the Caribbean, Mediterranean and United States for nearly seven years.

As head chef on one of the yachts, the clients he cooked for included celebrities such as Beyonce and Jay-Z, Bono, Paris Hilton, P Diddy and Rihanna.

Cooking for celebrities was rewarding work and some were "super chilled" but some could be challenging.

His most challenging celebrity diner was Paris Hilton.

"She was pretty tricky — she gave me 45 minutes to get her lunch ready and gave me 15 different dishes that she wanted — she ate a teaspoon of each of them and sent it all back. I won’t miss cooking for Paris Hilton again."

When asked if he ever got itchy feed for travel, he replied no: "I’m hugely content where I am now, my feet are right where they need to be. I’m happy where my life is and the chapter I’m in."

For the latest chapter to become an ambassador, he had to submit recipes and photos of two dishes — one featuring beef and one lamb.

From the recipes entered, former ambassadors selected 15 finalists, who were announced in January.

The 15 chefs then needed to have their two dishes on their menus for a fortnight, so an anonymous diner could judge them to find the four ambassadors.

Mr Davies was born and raised in Darfield and left school, age 16, to study cookery at the Christchurch Polytechnic Institute of Technology.

He got a job at the Crown Plaza and Harvey Nichols in London before working on the yachts.

The couple decided to return to New Zealand after discovering they were expecting their first child.

"We wanted to give them the same upbringing we had."

Ms Wright was originally from Gore. She returned to New Zealand to look for opportunities as Mr Davies spent three months working overseas and three months at home.

The three-month stints he worked overseas meant Mr Davies was missing out on watching his son grow, so when The Fat Duck went on the market they seized the chance to buy it so he could move home permanently.

"We took it and haven’t looked back."

In his restaurant, he strived to use local ingredients as much as possible, including Alliance beef and lamb, eggs from Gore, fish from Dunedin and vegetables from Winton.

"I’m trying to tell the story of all the farmers."

He applied for the ambassador role because he wanted to "tell the paddock-to-plate story" and to have an opportunity to "give back" to younger chefs.

"I was very lucky in my career to have a lot of good guidance from great chefs. Now it’s my turn."

He was proud to be representing the South Island, Te Anau and the wider rural community of Western Southland.

Covid-19 uncertainty had been challenging for the hospitality sector but locals had provided plenty of support: "They’ve been amazing."

The couple had adapted the business to get through and were looking to the future.

"I feel like a lot of the hard work has been done and brighter days are on the horizon — no doubt about it — and I’m excited about what the next couple of years will hold."