'Ecky' still keeping his hand in after 50 years 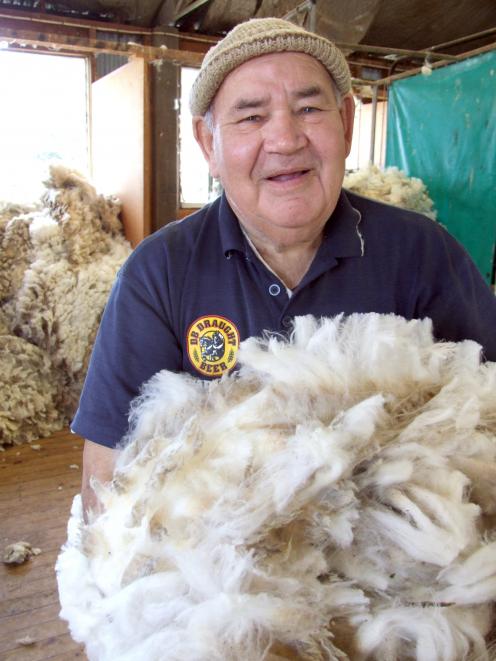 Retired stock agent Alistair Eckhoff - somewhat of a legend in Central Otago - has notched up 50 consecutive years of wool-classing this season.

He has no intention of retiring from it either, preferring to continue doing a handful of sheds to keep his "hand in".

Originally a town boy from Alexandra, Mr Eckhoff (73) was educated at Otago Boys' High School and was keen to become either a farmer or a physical education teacher, but having to study science for the latter put him off that particular career.

At 21, he was given a job as a stock agent based in Omakau, provided with a house and a car - "just the cat's pyjamas" - and a 38-year career followed.

It was Harold Smith, then head auctioneer for National Mortgage, who suggested Mr Eckhoff have a crack at becoming a wool-classer and he then gained his qualifications.

For his employer Wrightson, it became a "pretty good lurk" for if a classer was not available on a property, he would be seconded. Despite it not being his proper job, he did it "because it was all a learning curve".

He would coincide his holidays with classing duties and what started out as two weeks would become a month.

Mr Eckhoff quickly developed a passion for wool and the enjoyment of "getting into some really nice wool" - "there's nothing better" - had never diminished. In fact, he described his classing years as being a "wonderful experience".

He has been heavily involved in the New Zealand Merino Shears, and is patron of the event which marks its 60th anniversary in 2021.

President Greg Stuart, who has known Mr Eckhoff for many years, described him as a character.

He had been a mainstay in the woolhandling at the event and his contribution had been "immense".

He had a great rapport with all of the competitors and with fellow judges, whether woolhandling or shearing, and he was "always a friend to everybody", Mr Stuart said.

Wool has taken Mr Eckhoff around the world - including to the world shearing and woolhandling championships in 2005 where he represented New Zealand on the judging side - and he had made many good friends.

As he worked in a wool shed near Fruitlands last week, the esteem in which he was held by his colleagues was evident.

Working alongside a young crew from Peter Lyon Shearing, Mr Eckhoff said he enjoyed the company.

"They treat you like you're their father. The girls all seem to love you, they all want to get into your shed. `Where are you going next Ecky?' they say.

"It's the camaraderie of the kids. They all appreciate what you're trying to do for them."

Encouraging young people was something Mr Eckhoff felt very strongly about. He gave a donation to the most promising woolhandler at the Merino Shears, and also jointly sponsored a novice event to encourage young people to have a go. That was the only way they would improve, he said.

And he recalled all the help he had been given over the years, particularly in his early years as a stock agent when even opposition stock agents would give advice.

"There was a lot to learn. That's why I was keen to help farmers with tailing ... you get to know them," he said.

Mr Eckhoff would go the extra mile too; when he was heading out classing, his car might have drench to drop off at farms, or he would have shearing emeries, twine and needles to sell as he went.

All up, it had been a "wonderful" career, even though farmers never achieved the sort of money they were getting today.

There had been other changes; back in his earlier years, the only cow to be spied in the area would be a farmer's house cow, yet now there were dairy farms in Central Otago.

Technology had also changed the life of an agent.

Five decades of classing seemed to have gone quickly; not much had changed over that time, physically, shearing was still a hard job and the principles had not really changed.

The only thing that had really changed was different things growers wanted done with their wool, to meet various specifications required.

Mr Eckhoff was classing at about eight sheds this year; several in the Fruitlands area and the rest in the Ida Valley. That was ideal for him as he lived at Moa Creek where he had leased out his farm.

Some of the young people he encountered now were fourth-generation - "they all know Ecky" - and he enjoyed the many genuine characters he had encountered in the industry.