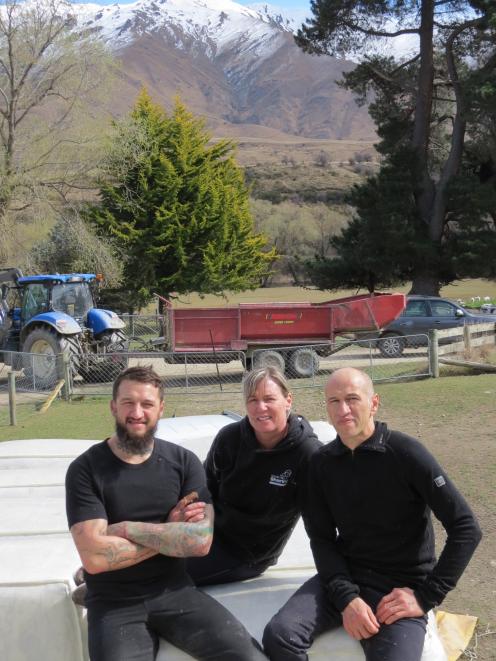 Alexandra shearing contractor Colin ‘‘Mouse’’ O’Neill (right), along with wife Jeanine and brother Shaun O’Neill were shearing at a woolshed in Cardrona last Wednesday. PHOTO: YVONNE O’HARA
When Colin "Mouse" O’Neill first considered setting up as a shearing contractor five years ago, he knew it was a big risk, and he had his family’s future at stake.

Mr O’Neill, of Alexandra, has worked in shearing sheds since he was 12 and has been shearing professionally and competitively for 27 years.

His parents, Marie and Terry, worked in the woolsheds and his grandparents were orchardists in Alexandra, where O’Neill Cres is now.

He wanted to establish his own company, Mouse O’Neill Shearing, to provide a future and a legacy for his wife Jeanine’s three children, Kace (18), Ryan (15) and Cori (10).

They have also spent the school holidays working in woolsheds.

He wanted to work less and have more freedom to spend time with the family or play sport.

"It was really hard to get started, but we made it through," Mr O’Neill said.

"That was a scary time."

"I think in the past five years I have worked harder than ever."

Despite the huge learning curve, the hard work and worries about money, it was the faith in his abilities and reputation from Jeanine, from his first farming clients and from his shearing brothers John (Jockey) and Shaun, and sister Atiria Te Huia, who left their jobs to join him in the new business, that proved important to the company’s success.

Mrs O’Neill said without his brothers and sister joining him it would have been a lot harder.

"They were instrumental in us being here now," she said.

"They took a huge risk coming with us, without knowing how much work they were going to get.

Mrs O’Neill is a woolhandler and also does the bookwork.

They employ 32 staff in two gangs, including Nathan Stratford, of Invercargill, and four-lamb shearing record-holder Megan Whitehead, of Mataura.

He also has a cook, Ruby O’Neill, who feeds the crews.

Mr O’Neill said when he first looked at starting out in 2015, he rang one farmer who was keen to give him a start.

Shortly after that, he had other farmers ringing, asking him to do their shearing.

"We have some really good clients, which makes our job a lot easier," he said.

"We try to make sure we have the same crew every day, providing no-one gets sick, and we get the farmer and his family to meet them and we invite them down for morning tea."

The couple were given advice about starting a business from the New Zealand Shearing Contractors Association.

Mrs O’Neill also received advice from Sandra Waitoa, who works at their accountancy firm in Alexandra.

Mr O’Neill said one of the keys to their business was to look after their staff and maintain their reputation for providing quality workmanship.

"Every job has to be perfect," he said.

"If we don’t get it right, we do not get a second chance.

"However, there is tremendous satisfaction doing this, running this business."

‘Not many downsides’ to farming