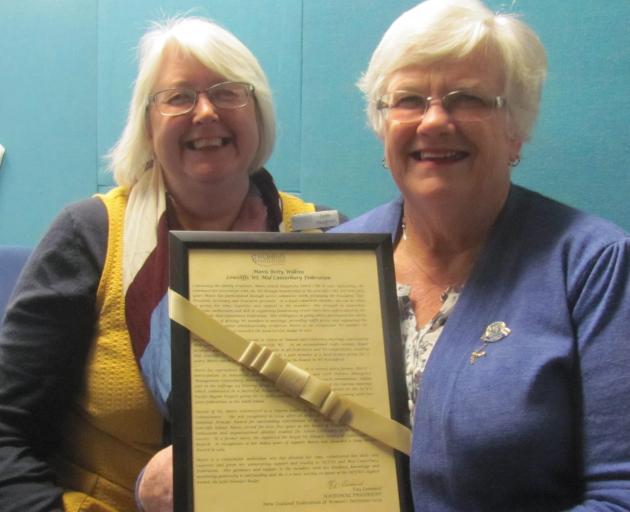 Mrs Wilkins, a member of Lowcliffe WI, was one of just five women around the country to be awarded the national badge this year. The others were from the West Coast, Buller, Manawatu and Papamoa Beach.

It also acknowledged her work outside of the WI, which included GirlGuidingNZ, Royal NZ Plunket Society and Lowcliffe School.

Nominated, without her knowledge by past president, and friend, Jude Vaughan, Mrs Wilkins was humbled by the prestigious award.

She admitted shedding a few tears when she found out the badge had been awarded.

It was such a high accolade given to her by her peers, and it meant so much.

''It was a very emotional, incredible thing.''

Mrs Vaughan wrote the citation after secretly interviewing sources close to Mrs Wilkins and swearing them to secrecy.

Among them was GirlGuidingNZ's Elaine Vallender, who served with Mrs Wilkins in Guides.

''For 20 years Mavis Wilkins was the driving force behind the success of the Girl Guiding in the Hinds district (which included the area from Lowcliffe-Longbeach area and inland to near Mayfield). She provided a great role model for younger and less experienced leaders and provided girls with great opportunities to gain life skills,'' Mrs Vallender wrote.

Mrs Vaughan said for more than 50 years Mrs Wilkins had been actively involved in WI from occupying the president, vice-president, secretary and treasurer positions to putting in the hard work as a committee member.

''Her strength in leadership, infectious enthusiasm and skill in organising fundraising events have been appreciated by her WI and the Mid Canterbury Federation.''

The publication of the Edna Low Cookbook in 2005 was a highlight for not only the Mid Canterbury region but the South Island.

''As a loyal committee member, she can be relied on giving her time, expertise and support to the members.

''Her willingness in going above and beyond her duties such as offers of driving WI members to meetings, providing raffle prizes and supporting the Federation committee cohort wholeheartedly, reinforces Mavis as an exceptional WI member.

''As an accomplished craftswoman, flower arranger and skilled cook, Mavis participates in all Federation and WI competitions, ensuring that Lowcliffe WI has full representation.''

The badge was formally presented at the New Zealand Federation of WI's annual general meeting in Taupo on May 27.

Mrs Wilkins' husband, Bryan, daughter, Heidi and Mrs Vaughan (national vice-president) were on hand to see her receive it.