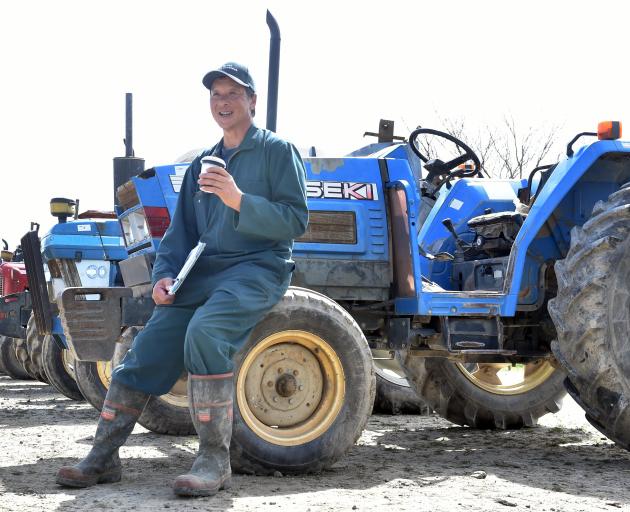 Outram farmer Graeme Young takes time to stop and smell the coffee at an auction of farm equipment on his property on Saturday morning. PHOTO: PETER MCINTOSH
Everything had to go at a farm auction on Saturday as a prominent Dunedin farmer called time on nearly 50 years of growing produce on the Taieri Plain.

After more than 45 years bringing his vegetables to market, Outram farmer Graeme Young decided it was time to take time for himself.

His parents had moved to the area and bought the farm in 1959, and Mr Young left school in 1974 to go to work for his father.

The decision to retire was at first "quite daunting", but since finishing up he had been enjoying not having to worry about the weather, staffing issues or market prices.

Hundreds turned out to an auction of tractors and farm equipment on Saturday afternoon at Mr Young’s farm, with a row of vintage tractors attracting the lion’s share of attention.

Mr Young said a 1959 Massey Ferguson was a particular favourite of his, having been bought brand new by his father early in the life of the farm.

There had been many changes in the industry over the years, with the shift from taking produce to market twice a week in the early days having shifted to daily markets.

That move had shifted risk from the supermarkets back on to farmers.

"This used to be sort of a lifestyle business, but as the years progressed it turned more into a business."

Auctioneer Rob Fowler, of Rural Livestock, said the auction was a total clearance, and all 10 tractors had sold "and to good homes".

There were 368 registered buyers present, with people travelling from as far as Nelson in the north to Bluff in the south.

Saturday’s auction represented an end of an era in Outram, Mr Fowler said.

"That’s the last Chinese grower on the Taieri. From 24 growers to none."