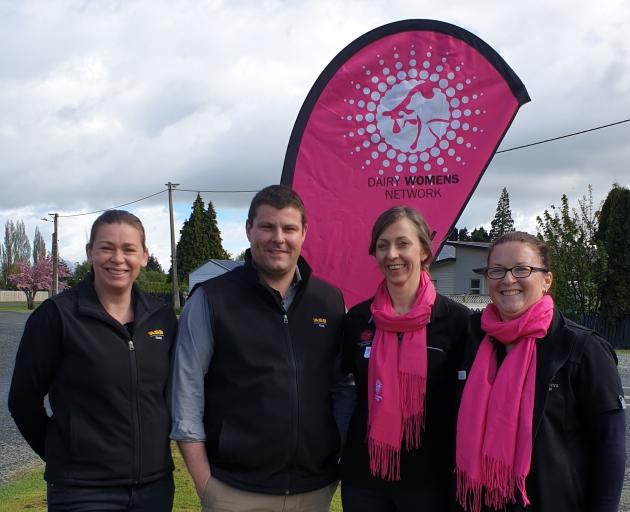 From the Isle of Man to a dairy farm in Mossburn and becoming a Dairy Women’s Network northern Southland regional leader, Alexa Smith has successfully managed big changes in her life. Attending a DWN ASB rural workshop in Lumsden last month are (from left) Emma Shaw and Michael McKenzie from ASB, Alexa Smith, of Mossburn, and fellow regional leader Julz Orr, of Dipton. Photo: Supplied
It is quite a leap from the Isle of Man, in the Irish Sea, to a dairy farm in Mossburn.

Along the way, Alexa Smith farmed in Missouri, helped organise the 2011 Rugby World Cup, the Winter Games and Warbirds over Wanaka in New Zealand, and was involved in the Commonwealth Games in Glasgow.

Now she is married with a toddler, rears calves and is the Dairy Women’s Network’s regional leader for northern Southland.

She is married to dairy farmer Bradley Smith and helps when needed as a relief milker and calf rearer and also does the business’ bookwork when 2-year-old Vaila is not keeping her busy.

Mrs Smith moved to New Zealand in 2008 and met her husband while working in Invercargill as a regional event co-ordinator for Southland’s contribution to the 2011 Rugby World Cup.

‘‘I am from the Isle of Man, which lies between Scotland and Ireland,’’ Mrs Smith said.

‘‘I was working with Rugby Southland for RWC down here, for the pool games.

‘‘I was also the point of contact for the RWC operating committee in Wellington.

She organised more than 150 volunteers, sorted out accommodation for staff and players, and arranged practice areas and training pitches.

‘‘It was such a great time and I met lots of people.’’

Before moving to Invercargill she was also an event co-ordinator for the Winter Games New Zealand, Challenge Wanaka and Warbirds over Wanaka.

Later she was involved in the 2014 Commonwealth Games in Glasgow.

‘‘I studied biological science in the University of Edinburgh and thank goodness it has finally come in useful, now that I am a dairy farmer.

‘‘I also had a passion for sport and desire for travel.’’

She met her husband in an Invercargill pub during a night out, and they married on the Isle of Man in 2016.

However, from 2015 to 2018 they were dairy farming in Missouri for a New Zealand/Irish company that wanted to implement a New Zealand dairying system.

‘‘That was challenging, interesting and fascinating.’’

The Missouri climate was significantly different and more challenging.

They and their daughter, who was born in the USA, decided to return to New Zealand after they found their visas would not be renewed, choosing Southland to live because Mr Smith had farmed there before.

‘‘Northern Southland was new to us and we have settled in really well, and met lots of nice people.’’

She decided to volunteer as a northern Southland regional leader for Dairy Women’s Network because she wanted to meet other women in the dairy industry from whom she could learn.

‘‘Although I was not from a dairy farming background, I wanted to learn while looking for something that would be fun and benefit me while I am at home with Vaila.’’

She, Julz Orr, of Dipton, and the rest of the DWN southern hub regional team leaders organise 10 to 15 DWN events for members a year, which include workshops that look at calf rearing, finance and health and wellbeing, as well as issues such as freshwater.

Their next event is a Christmas Catch-up coffee morning at the Dome Cafe on December 13.

‘‘It will be a chance to relax and catch up before the Christmas rush.’’

When not on the farm or with DWN, she enjoys outside activities with the family.

‘‘I am also trying to learn to garden, but things keep eating it, like lambs and calves,’’ she said.