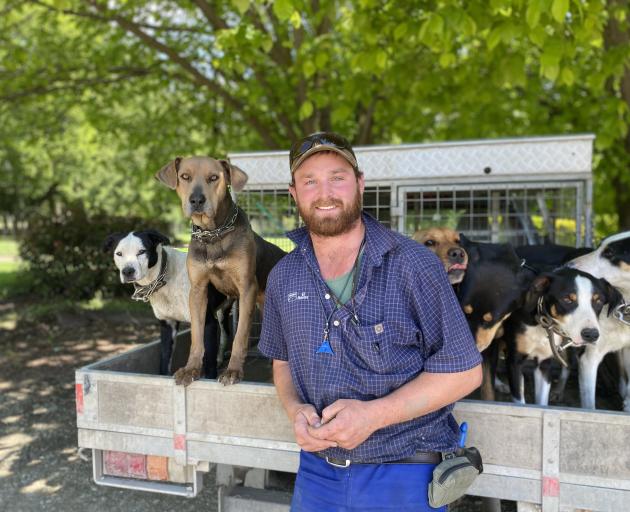 Ollie McLelland laughs that his first foray into a farm career was to sink or swim.

"I sort of floundered, doggy paddled and got myself to the side kind of thing".

Fast forward but a few short years and the 24-year-old has found himself in an equity partnership with Ian and Wendy Ritchie and steering the ship of a 2200ha sheep and beef farm at the foothills of the Rock and Pillar range just outside Middlemarch.

"Sometimes I have to pinch myself that this has all happened. I have a huge amount of gratitude for the Ritchies," he said.

Born and raised on a farm near Palmerston, Mr McLelland started a mechanical engineering apprenticeship when he left school. He did two years before deciding "working inside four concrete walls" wasn’t for him.

"At the time the Ritchies were farming in Palmerston and I just rang Ian up and asked if he had a job going."

It was only a few months later that Ian and Wendy moved to a farm in Milton, leaving him to run the day-to-day aspects of the Palmerston operation.

"I knew a thing or two, being off a farm, but it was a pretty big learning curve to be left to it, more or less."

Following more land acquisitions by the Ritchies, Mr McLelland ended up as stock manager when they purchased Kelvin Groves’ farm in Middlemarch and the progression began. Neighbouring farm Littlebrook has since been added to the mix.

"One thing that is for certain here is change. We are still finding our feet and working out the synergies between the two places."

Humble by nature, Mr McLelland stopped short of answering just how he has managed to work his way up and into a partnership.

"I guess now that I have experienced managing people, I do think the ability to show work ethic is key, that, and just having the confidence to take initiative.

"Whether it’s the right way or the wrong way — if someone has a go at doing something, or even if they ask a daft question, then you can’t knock them for trying."

Mr McLelland credits having good mentors around him; the Ritchies, his parents, Kirstie and Geoff McLelland, and he is also part of a farm discussion group led by farm consultant Peter Young.

His partner, Hayley, a physio based in Alexandra, comes through to the farm most weekends.

"I usually set her to task on the farm with me. It’s amazing how much can be achieved in a weekend," he laughs.

The engineering knowledge he gained from those two years as an apprentice have also come in useful.

"I have never regretted learning the trade. It’s been really handy skill to have."

When it comes to an equity partnership, Mr McLelland says communication is key.

"I talk to the Ritchies most days. I think I am pretty easy going, the ability to be open-minded about other ways of doing things, being adaptable and flexible, that’s all pretty key.

"Knowing that everyone makes mistakes including me — it’s about working out the how and why something happened, talking about how it can be done next time and moving on.

"You’ve got to move on, otherwise it just stops progress and becomes baggage," he said.