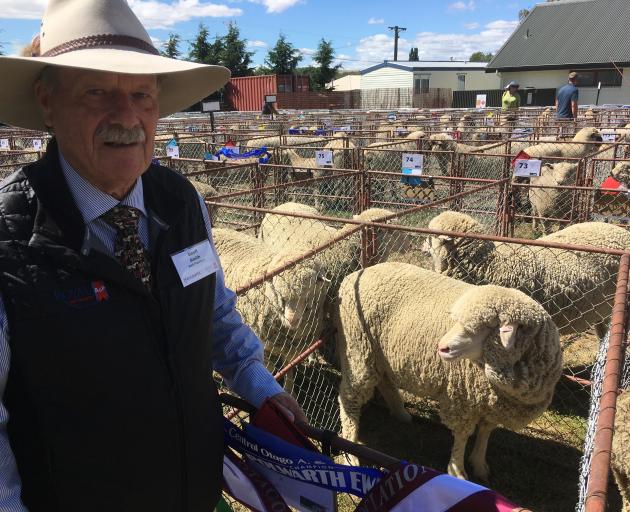 New Zealand Royal Agricultural Society president Geoff Smith attends last week's Central Otago A&P Show in Omakau. Photo: Alexia Johnston
Geoff Smith attends as many A&P shows as he can during the season and there are 97 of them.

In his third year as the New Zealand Royal Agricultural Society's (RAS) president, he spends time finding ways to ensure the shows remain relevant to their communities, as well as building relationships with other rural and civic organisations.

He is in Central Otago this week to go to the Mt Benger, Central Otago and Maniototo shows, as well as attending the society's southern district executive meeting in Tapanui on Sunday.

One of the topics to be discussed at the meeting is the RAS's new strategy document, which outlines key platforms that are needed to ensure the 97 shows in the country continued to be relevant both to their districts and at a national level, as well as addressing the attraction of more young members and how to promote its brand.

Mr Smith is from Pukeoware, near Auckland, and he has a lifestyle block and an interest in breeding sport horses and cattle.

He comes from a corporate background and initially served terms on the RAS executive board for three years, later became vice-president, and then president.

''This time of year can be quite hectic.

''Most weekends during the season I go to shows.''

One of his main concerns is how shows can continue to attract people, entrants, trade exhibitors and committee volunteers.

''Our fundamental job is to reach out and make connections between urban and rural, which is something our members do extremely well.''

''We have to engage people with what we do.

''My corporate background encourages me to look at ourselves [the shows] in terms of the markets we are competing in, i.e. events.''He said shows in remote communities were usually well attended.

''However, compare that to my home show at Pukeoware where there will be five other significant events in addition to ours on at the same time.

''It is a constant challenge to make more people come.''

Another important role is that of education of both children and non-rural folk.

He had heard stories about children not knowing where milk came from, that carrots grew underground or of tourists who think shearing is skinning the sheep.

''I am really keen on home industries and that is becoming an increasingly important part of the shows.

''[In many areas] they deal with people who do not know how to grow vegetables or to preserve and they are teaching them to do that stuff.

''That is something I am really keen to promote.

''It is all about making connections.''