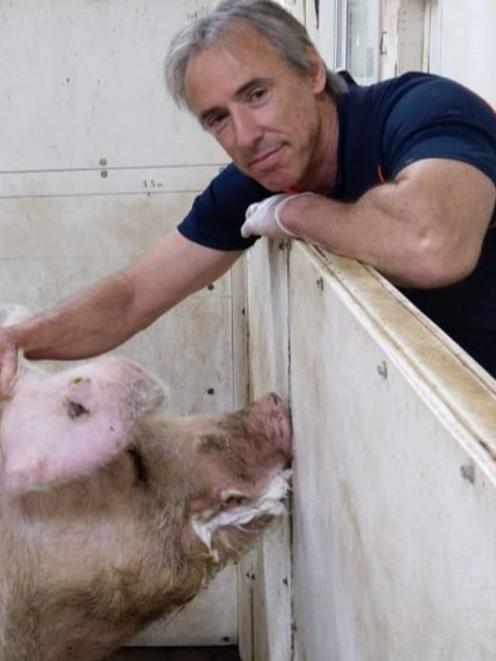 The North Canterbury-based vet is one of just three specialist pig vets in New Zealand, serving clients all round the country.

“We are on the back foot as an industry. The vast majority of the pork imported into New Zealand comes from farms that don't meet our animal welfare requirements, our environmental requirements or our labour regulations, all of which help reduce their production costs lower than ours,” Dr Welch said.

“Overall, we think we are on pretty good ground internationally, but we are striving for continual improvement.”

The pork industry had changed a lot over the last 20 years, with about 61% of meat now imported and very little exported.

There were around 80 large commercial farms spread around the country, with Dr Welch working with many of those farms more as a management consultant with a focus on housing, reproduction, nutrition, disease eradication and providing support and training to farm workers.

“I very seldom deal with a sick pig, as it's more about training staff on farm and advising them over the phone,” he said.

“I focus on overall animal welfare, keeping diseases under control and eliminating disease where we can and helping the farm to be more profitable.”

Recent media coverage emphasised there was confusion between sow crates (gestation stalls), which have been banned in New Zealand, and farrowing crates, which were used for sows with new born piglets to reduce piglet deaths and improve their health and welfare.

Around 55 to 60% of sows were kept indoors and all of those used farrowing crates, which Dr Welch described as “a maternity hospital bed”.

“There's a perception that because around 40% of New Zealand’s sows don't use farrowing crates that they're not needed but that’s misleading, because they are in outdoor farming systems which are a different model with lower investment costs, but higher piglet death rates than the indoor farms.

“When a sow lactates, she is providing milk to piglets 24 times a day, or every hour. During that time she is totally focused on her piglets, getting food and water and getting as much rest as possible.’’

Alternative housing systems to farrowing crates or maternity pens were being investigated, but the farrowing crate was the best option available, Dr Welch said.

Most farm visits were planned in advance, with Dr Welch following strict biosecurity protocols between farms to avoid spreading diseases, showering in and showering out and changing clothes on entry.

“I visit most farms two to four times a year for routine herd health and advisory visits, but I very seldom go to more than one farm in a day.”