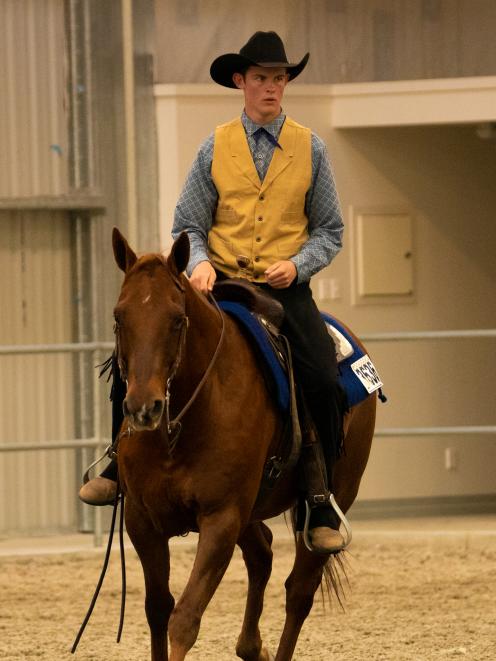 Stuart Beattie (17), a year 13 boarder at Waitaki Boys' High School, has been selected in the American Quarter Horse Association New Zealand youth team to take on Australia in Taupo in September.

The event will be judged in several disciplines: horsemanship, showmanship, trail riding (completing a course including a bridge and a gate), pleasure riding (displaying the movement of the horse) and reining (riding in a fast pattern).

Stuart said he had been riding horses all his life.

His father had always been a rider, and his mother took up the practice when the two met.

Now she accompanies Stuart to competitions.

The family live near Outram, inland from Dunedin, where they breed quarter horses for the show circuit.

Stuart goes home most weekends to keep up his riding skills.

His horse is a 9-year-old gelding called Kash Laden Kat.

Stuart was given him as a foal and spends 45 minutes to an hour every day riding him, then extra time feeding and grooming him.

''You have to know your horse pretty well.''

Some horses and riders were a naturally good match.

It was possible to work on building a good relationship with a less favourable one, he said.

His favourite aspect of the sport was ranch riding, which involved patterns and extension.

Now the rugby season has started, Stuart will be a lock in the Waitaki Boys' Second XV most Saturdays.

However, the team has a large number of players, which will allow him to have a few weekends off to head back to Outram for extra riding practice.

The other members of the New Zealand team are Adam Carlisle, of Wairarapa, Emma Downs, of Waikato, Jessica Hale, of Southland, and Reece Mahuika, of Nelson.

Stuart has not yet decided what he will do after he finishes school this year.

If he wants to take his Western riding further, he will need to go overseas, probably to the United States.