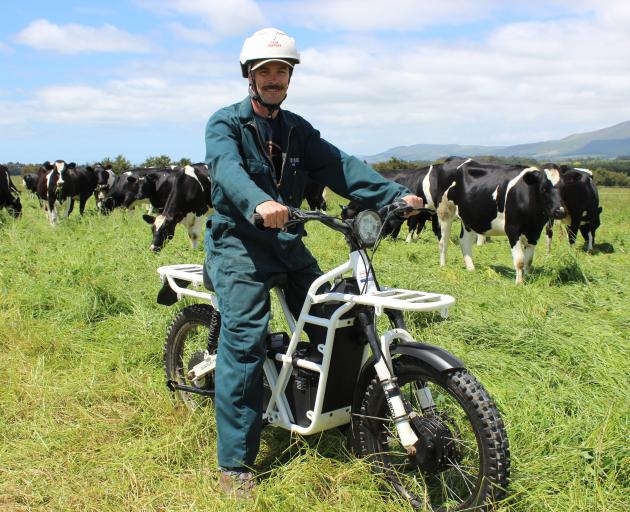 There's no need for Mark Anderson to fuel up before shifting cattle at Westridge Farm, because his motorbike is electric.Photo: Ella Stokes
Regenerative farming is all about starting from the bottom up, a Waiwera South farmer says.

Over the past three years, learning from other farmers and researching, Mark Anderson has gained a wealth of knowledge about regenerative farming.

After leaving school, Mr Anderson worked locally before travelling. He worked overseas on dairy farms in Canada and England.

On his return home, he took over the now fourth-generation family property, Westridge Farm.

The dairy farm was just under 600ha which milks 750 cows, self-contained.

He said his biggest focus was on the health of the soil and he was lucky to have a contract milker on the farm who was also very conscious of it.

''Planting and fencing off waterways is important ... but, if you can improve your soil health you stop anything damaging getting into the water in the first place.'' 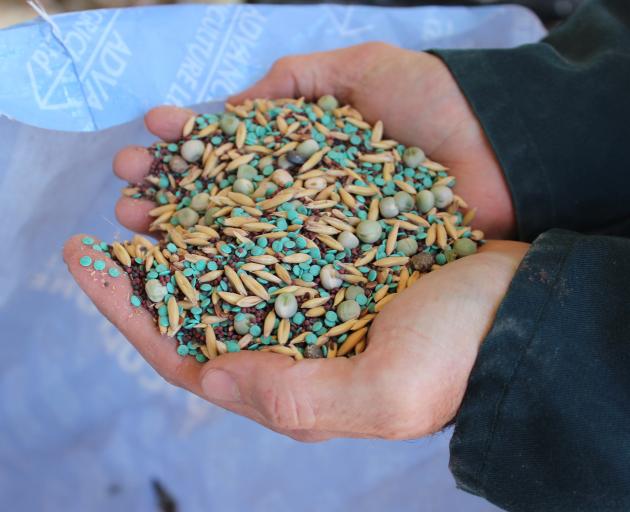 Mark Anderson is trying to plant diverse crops. Pictured is seed for a summer crop of peas, oats, summer turnip, linseed and vetch.
''It just makes sense to work with nature rather than against it.''

If the soil was healthy, the plants were healthy and so were the animals and ultimately the humans who eat the products leaving the farm, Mr Anderson said.

He was passionate about improving the soil quality and had some main principles he used to achieve it.

Mr Anderson said pasture plant roots go down as deep as the plant is tall, so taller grazing and residuals allowed plant roots to pump liquid carbon deeper into the soil to grow organic matter.

He aimed to have the cows in each section of pasture for less than half a day on 30-day rounds with an aim of 40 days in summer.

2. Mobbing cattle tighter but giving them more breaks per day.

Mr Anderson said this was a way to find the goldilocks residual which would allow plants to recover the fastest but still provided the quality for the stock to feed.

Mr Anderson has quite the mixture when it comes to both his pastures and winter crop and said this was an efficient way to boost both health of animals and soil quality.

During winter and even summer Westridge Farm could experience high levels of rainfall Mr Anderson said.

He has since invested in stand-off pads to protect the soil during wet weather.

Mr Anderson said although he had done some of his own research, he had learnt much from other farmers.

''Farmers nearby opened my eyes to how we can farm better.''

In future, Mr Anderson has goals to help educate others from his own experiences.

''Everyone is trying their best to improve the quality of their farming systems. It's good to learn what other people are doing on their farms and see if it might work on yours.''