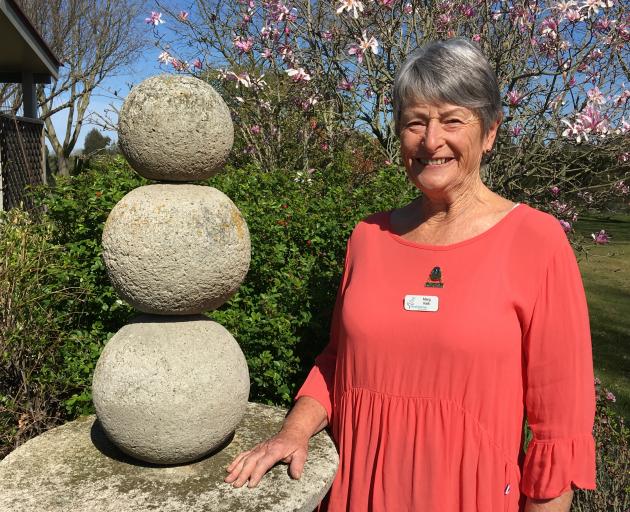 They offer good fellowship and fun, and the chance to get out and do things, she says.

The branch does fundraising for community and national causes, acknowledges births in the district, organises social occasions and guest speakers and offers support to others going through difficult times.

''They offer support where they can in the district and have been known to help with food and support,'' she says.

The women regularly volunteer with meals on wheels, run a school holiday programme and fundraising activities, including for the Christchurch Hospital rooftop helipad and Breast Cancer Research.

Mrs Kelk was born and bred at Mt Pisa Station, Cromwell, and joined the Country Girls Club as a 20-year-old living in Dunedin.

Later, as a young married woman, and following in the footsteps of her late mother Elizabeth Elsie, she joined the Women's Division of Federated Farmers (WDFF).

She remembers at an early age taking the bus from primary school and getting dropped, with other girls, at whichever farm property her mother's group was meeting and enjoying the great afternoon teas put on for the meetings.

It was while living in Dunedin Margaret met future husband Geoff at one of the weekly dances put on by Joe Brown at the Dunedin Town Hall.

They married in 1968 and had four children, David, Kirsty, Suzanne and the late William.

They now have seven grandchildren.

After the loss of William, they moved from their 1618-hectare high country sheep farm nestled along the banks of the Clutha River to the flatlands of Winchmore in Mid Canterbury, midway between Ashburton and Methven townships.

They chose a 60-hectare property to farm beef cattle, which they built up to 202ha over the years, but have since scaled back.

Now like a lifestyle block at around 30ha, it suits Geoff, who is an amateur horse trainer.

The move to Mid Canterbury more than 30 years ago resulted in Mrs Kelk joining the then- Winchmore WDFF, now the Winchmore branch of Rural Women New Zealand.

And she jumped right in, boots and all.

Her long and outstanding service has earned her life membership of the branch.

She was awarded the surprise honour after presenting her 20th, and final, annual report to the branch members last month.

It was presented by Winchmore RWNZ president Elsa Hydes, who acknowledged Mrs Kelk's tremendous contribution over the years. Fellow member Ngaire Brown presented her with flowers.

During Mrs Kelk's presidency the branch ran school holiday productions of Cinderella and Peter Pan, giving children in the district and neighbouring areas the chance to gain stage experience.

Mrs Kelk said they were ''very successful and rewarding programmes'', which ''certainly profiled and entertained our district''.

Over her time as treasurer Mrs Kelk has ensured the finances of the branch are kept in order, from adjusting to new criteria and forms from the national office, to being instrumental in allowing some generous donations to community organisations such as the Ashburton Trust Event Centre and the EA Networks Sport Centre.

There have also been upgrades to the Winchmore Community Hall, and the window curtains hanging at the hall were made by Mrs Kelk.

Mrs Kelk was also a member of the committee who, in December 2006, supported a fundraising project which raised $26,210.36 for Breast Cancer Research. A 2008 Calendar (similar to the concept in the popular Calendar Girls Movie) was initiated and the calendars sold for $15.00 each. Mrs Kelk was Miss November.

Mrs Kelk said she didn't mean to take on the treasurer role for so long; it just worked out that way.

She has handed the reins over now and ''will assist wherever there's a need'' but plans to start helping out again mentoring with the Mid Canterbury Rural Driver Licensing Scheme.

And there is golf, singing in the Mid Canterbury Choir and her work as joint parish clerk at St Andrew's Church. And, of course, the joy of more time for grandchildren.