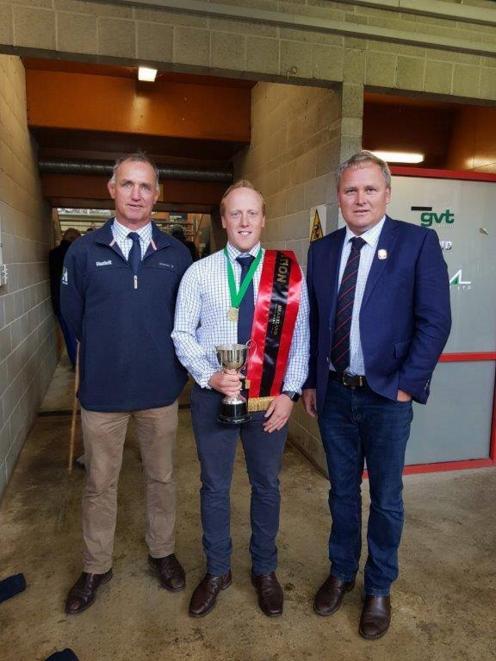 "There was some strong competition. I didn’t expect it," Mr Sherratt said.

After last week’s high, Mr Sherratt said he would be out driving some of the 18,000 lambs to the pen at a big on-farm sale and watching the senior auctioneers in action.

Seven young auctioneers were given the chance to call the shots in a live auction with real cattle at the Canterbury A&P Association’s prime cattle competition, organiser Mick Withers said.

"Each contestant sold three lots, being the placegetters from the beef competition, in what the judges described as a very close result."

Mr Sherratt took home the New Zealand Stock and Station Agents’ Association Trophy, the Denis Hazlett Medal and $2000 towards a trip to the Royal Sydney Show, where he will get the chance to test his skills against Australia’s best young auctioneers.

Hazlett livestock general manager Ed Marfell was thrilled to see one of his team come out on top.

"We had a couple of young guys in it. I think it’s good that they all get to have a go in a different environment in a competition and well done to them all for having a go.

"We are stoked and winning the Denis Hazlett Medal obviously means a lot to us."

Giving the young auctioneers the chance to compete at a real auction was good change from the usual "orchestrated auction" at the New Zealand Agricultural Show, he said.

Mr Marfell said Mr Sherratt was becoming a familiar face to clients in South Canterbury and Mid-Canterbury over the past three years and was regularly in action at the weekly Temuka livestock sales.

Born and bred in Geraldine, Mr Sherratt grew up on a small sheep, beef and deer farm before studying for an agricultural commerce degree at Lincoln University.

Auctioneering was good for building up a young stock agent’s livestock knowledge.

"It gets you out and introduces you to a lot of people and you are out in front and it’s good for giving you those livestock values so when you are on farm you are relevant to the market.

As for what he says while on the podium, it is "just whatever comes out of my mouth".

"You always get to those big sales and someone bangs something out," Mr Sherratt said.

Karl Chitham, of Carrfields Tuakau, was second, and Cam Gray, of PGG Wrightson Cave, in South Canterbury, was third.