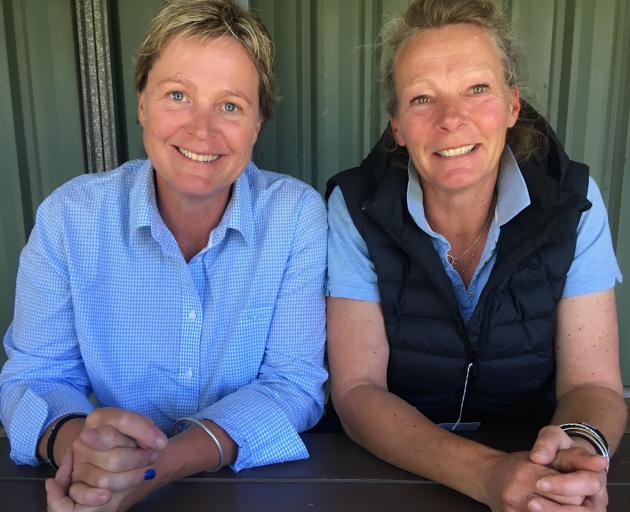 Maniototo sisters Janine Smith and Margot Hall take a break during the New Zealand Agricultural Show in Christchurch last week. PHOTO: SALLY RAE
It will be a sister act at Maniototo A&P Show in Ranfurly in February.

Siblings Margot Hall and Janine Smith will be at the helm of the show, as president and secretary respectively.

If their duties in those positions do not sound busy enough, Ms Smith will also be exhibiting about 25 sheep.

Mrs Hall was following in the footsteps of her father, well-known sheep breeder Ian Smith, who has had two stints as president.

Ms Smith took over last year from longstanding secretary Neville Wahrlich who was in the job for more than 40 years. "I haven't got that in me", she confided.

But she was passionate about small local A&P Shows and their importance in rural communities such as her own.

She could see Mr Wahrlich not being able to "find a way out", unless someone said "pick me" and she was influenced slightly by her father and sister, who both said she could do it.

On reflection, she was "not the least bit sorry" for putting her hand up, she said.

The first year was challenging as the show shifted from notebooks and handwritten receipts to now being online - "but we're there".

There was still a long way to go but it was to be a lot easier this year, she said.

The Maniototo A&P Show was always an important fixture for the both community and the Smith family.

Ms Smith recalled her floral sand saucer entries as a child, while her sister was more likely to be found asleep in the sheep pens, she quipped. And if Mrs Hall wasn't there, then she might have been exhibiting a pet lamb or a pony.

Ms Smith was hoping to see a bigger turnout at next year's show. As well as being about the show itself, the event was also a time for the community to catch up; life always seemed to be so busy and people were always in such a rush, she said.

Mrs Hall had been involved in the committee for years - "if you were farming in the Maniototo . . . you had to be there in some capacity".

She started as a steward in the wool section and ended up spending about 15 years as senior wool steward.

While Ms Smith had not really thought too much about whether it was unusual having two sisters in such positions, she acknowledged she felt both excited and relieved that Mrs Hall was coming in.

Last year, Mrs Hall was in the secretary's caravan with her sister as a runner and will fulfil that role again this year, and daughter Olivia Hall had been roped in too.

The pair were at the New Zealand Agricultural Show in Christchurch last week, where Ms Smith was exhibiting her Romney sheep, helped by her sister.

The sisters travelled to the show with a load of rams, enjoying spending the time together. There was a familiarity in attending the show, Mrs Hall said, and it was nice to see friendly faces.

They were also using it as an opportunity to promote their own show to stallholders and to have a look around.

"You have to go to shows to run a show and open your eyes", Ms Smith said.

Sheep and wool has long been a passion for Mrs Hall who "grew up in Dad's pocket", acknowledging there were a few school days wagged, particularly around lambing time.

Her sister lived in Greece for 26 years, and managed a sailing company before returning home in 2016 with partner Simon Norwick. Back in New Zealand, she took over her father's Romney and Dorset Down sheep studs.

Mrs Hall said she was grateful every day to have a sibling in the Maniototo - and the sisters were also neighbours.

"I knew coming home and having a sister nearby was going to be good but I didn't know this good. It's really, really lovely", Ms Smith said.

She had relied very heavily on Mrs Hall - who farms with husband Jeff - for farming knowledge, saying all her "stupid questions" were sent her way.

While it was quite a dramatic lifestyle change, it was one that she had adapted well to.

"I'm getting some new muscles and I'm really, really enjoying it. Every day I have to concentrate on what I'm doing."

While there were some challenges around farming, parts of it had stabilised and it provided a great lifestyle, Ms Smith said. The Maniototo, her sister added, was a great place to live.