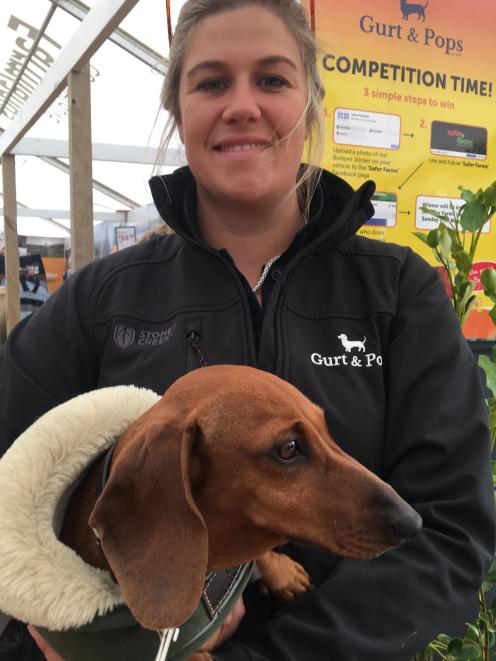 Poppy is the constant companion of Harriet Bremner, a North Canterbury-based teacher-turned-author who is focused on making the most out of life.

Miss Bremner's partner, James "Bob" Hayman, was killed in a farm machinery accident in the Hakataramea Valley in January 2017.

Following his death, she launched the brand Gurt and Pops and released her first children's book Bob `n Pops, which was a tale of the special relationship between Mr Hayman and the couple's dog Poppy.

Late last year, she launched a picture book Be Safe, Be Seen, which was aimed at keeping children safe on the farm.

Poppy represented children in the book by taking on the challenges of keeping safe on the farm as a little dog.

Her next book, under the Gurt and Pops brand, would be launched in March and the theme was mental health and wellbeing in children.

Another dog - Elle Perriam's black huntaway Jess - the mascot of the Will to Live rural mental health awareness campaign - would feature in that book, which was about teaching young people - or Jess - strategies for self-help.

It was a powerful form of educating and learning for children, Miss Bremner said.

The combination of books and children was something she was particularly passionate about.

"For me, it's about having conversations with people and becoming a normal part of everyday life," she said.

A primary school teacher, Miss Bremner finished teaching in July to concentrate on her new direction.

She is working several days a week for Safer Farms, an Agricultural Leaders' Health and Safety Action Group initiative.

Under her Harriet Bremner - The Raw Truth brand, she is speaking on everything from grief and resilience to farm health and safety.

"Grief doesn't go away; it's with you forever. I know Bob would want me to make the most of every day.

"Life is short. Embrace the day and live and do the best you can on behalf of those that aren't here anymore."

Poppy, she acknowledged, was "pretty special" and not bothered by the fuss, including children coming up for pats at the recent New Zealand Agricultural Show in Christchurch.

Having returned to Hawarden to live, to be near family, Miss Bremner said she had been very fortunate to have so much support. Her family were her "rock" and she had a group of friends who had been "there from day dot", supporting her with her "crazy ideas".

"I never stand in one place for very long," she said.