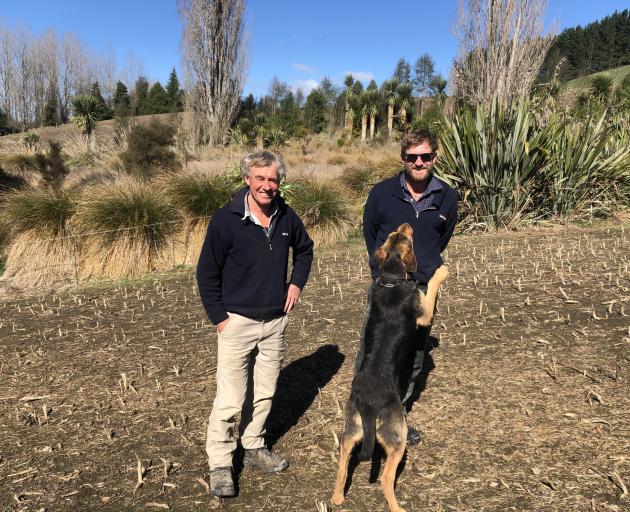 Peter Evans and son John stand beside one of their fenced off wetland areas, where they plant and preserve what grows naturally. PHOTO: GEORGE CLARK
Peter and Jane Evans always planned for their 1050ha property to be farmed sustainably.

The Pareora River weaves for 6km through their South Canterbury property, Alpine Farm, a 1050ha traditional sheep and beef farm of which 90ha is in forestry.

Farm timber was used for building on the property. Macrocarpa was used for the house and their workshop was built out of poplar.

The river’s continuous health has been a main focus on the family’s way of operating.

Like many farmers in the area, the stock mix was a 70-30 ratio of sheep and cattle.

Mr Evans said apart from an increase in the size of the holding, the farm had changed little since day one.

"It has always been sheep and beef, with a little bit of cropping. Forestry is a new mix — we have around 90ha of forestry made up of pines and a little bit of macrocarpa. I am thinking about cutting some down over Christmas to diversify income and control the gorse."

Conscious of the environment, Mr Evans said they had not been dairying or grazing, as it did not suit their country and would do damage in the wet season.

"We would like to run a profitable farm in a sustainable environment. That has been our goal for a long time."

Aspects of the Government’s Action for Healthy Waterways package, which came into effect on September 3, have been criticised by farmers.

Mr Evans expressed his frustration with the reforms and what he perceived was a lack of knowledge of farming systems and dialogue with farmers.

He would like to talk to politicians in Wellington and ask why some rules had been put in place.

"Federated Farmers had three or four days to discuss the new rules that came out a couple of months ago, and were not able to discuss it with the general farming population. From my understanding, this has not sat well with too many farmers."

"It all costs money and does not happen overnight. We all want to look after the waterways and are in it together."

One of the driving factors for a sustainable farm was the Pareora River, an important picnic and swimming place for hundreds of South Cantabrians each year.

The Evans can take cattle across the river twice a month — once for weighing and then brought back again.

"It only takes five minutes to put them through. A lot of these things [regulations] are too prescriptive," he said.

"The last thing we want is for farmers to pollute the river so much that the public could not swim in the river.

"With what we have done in the last 20 years or so, we have maintained the quality and do hope it will improve. It is in good shape."

The Evans would like more understanding of how the decisions were made, believing it to be a rushed policy.

"If people could not swim in the river, we would be the first to be upset about it."

The Government recently made changes to some of the winter grazing rules and said it would continue to make adjustments.

Agriculture Minister Damien O’Connor said the intent was very clear — to clean up the country’s waterways.

"We’ve made real progress in the area of winter grazing. There are some challenges ahead of us but I’m confident we’ll get this right.

"Where the regulations are impractical or unclear, we will continue to make adjustments," he said.