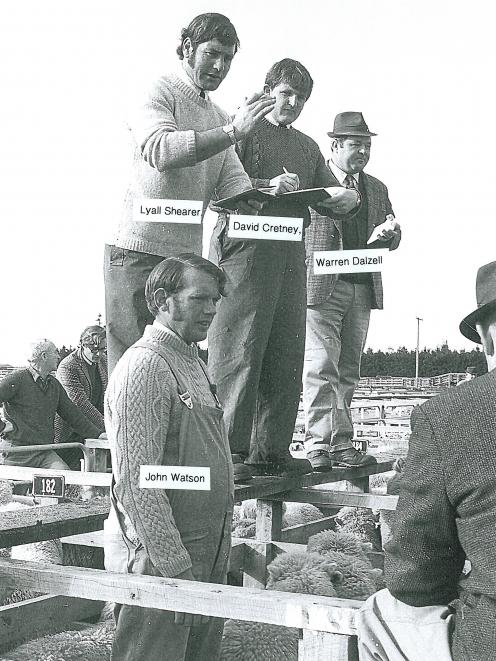 Stock agents in action during sheep sales at the Tinwald Saleyards, on the south side of Ashburton.
Stock agents wore ties in John Carter's day. And smart jackets.

Mr Carter, a former agent for Dalgety's and PPCS, has an impressive collection of photographs from the former-Tinwald Saleyards, just south of Ashburton.

He is looking to put names to some faces while those involved are still around to remember.

He has also put together a timeline of the saleyards' history.

In 1955, when Mr Carter started at Dalgety's as an office junior, there were many stock firms: Dalgety's, where ATS is, NZ Farmers' Co-op on the corner of East and Havelock streets, NZ Loan and Mercantile, on the West-Tancred corner, Pyne Gould Guinness (West and Tancred),

Stock sales in Ashburton began on June 18, 1864 with monthly sales at Turton's Hotel (which was on the north side of the Ashburton River) and it was another 14 years before Tinwald was able to offer an outlet for farmers.

The yards there opened in August 1878, behind Clark and Beswick's grainstore, and closed in 1882.

Around 1880, the Ashburton County Council built saleyards in East Street, on the site now occupied by the Ashburton Veterinary Clinic.

In 1882, directors were sought for 10 to 20 acres of land at Tinwald for a public saleyard.

A site of 4.85ha was offered and accepted.

In 1919 the Ashburton County Stock and Saleyards Company lost the use of the Ashburton saleyards, but continued to use the Tinwald yards until 1921/22 when it was taken over by Alex Hewson.

He ran both yards on alternate weeks.

In 1924 Mr Hewson bought the Tinwald yards and leased the Ashburton yards.

The yards closed in 2017 and were demolished, and the land is now used by Greg Donaldson Contracting.