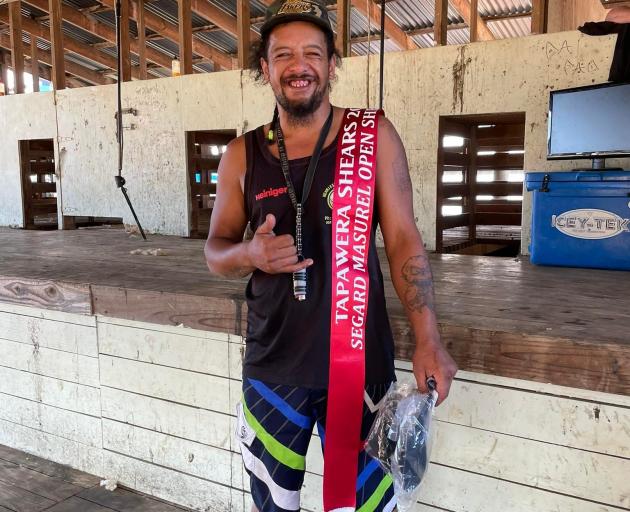 Floyd Haare celebrates his open shearing title at Tapawera on Saturday. PHOTO: SUPPLIED
Another shearer from Southland has joined the list of pen shearing competition winners this season with a victory on Saturday for Floyd Haare, at the Tapawera Shears, southwest of Nelson.

Haare (34), originally from Ohai, now in Collingwood, had not shorn a competition since mid-February last year, two weeks after scoring his first open win at the Inangahua A&P Show’s Reefton Shears.

He became the fifth open-final winner from Southland this season.

Limited by geographical isolation, Saturday’s victory was only his fifth win across the grades since he started in 2004-2005, but he was able to beat event favourites Jack Fagan and Paul Hodges, who had flown from Auckland for the day after Fagan’s win in the North Island Speedshear Championship in hometown Te Kuiti on Friday night.

Hodges, from Geraldine, won the race over the 20-sheep final, finishing in 18min 27.97sec, but Haare was next, beating recent world-record-breaker Fagan by half a minute and with the best quality points able to hold out the day-trippers in final calculations, winning ultimately by 1.52pts from Fagan, with Hodges third.

There were eight in the open-class, but just 13 across the grades, with none in the senior class. Two others took part in a women’s event won by regular competitor Kimberley MacLean, of Motueka.

The low numbers again highlighted the struggles in the coronavirus crisis, which has seen 24 competitions cancelled throughout the country, and shortages of shearers in the workplace without numbers usually bolstered by shearers from overseas.

Haare had won the national longwool ewes title at Lumsden in 2005, and repeated the effort in the senior event four years later, followed the next day with a national senior crossbred lambs title.

He reckoned he was just there to make up the numbers at Tapawera and said after the win: "I’m still trying to wrap my head around it all. I honestly didn’t think I was going to win today."

"It was a great outcome though, and I can’t wait for the next show," he said, looking forward to a defence of the Reefton Shears title on February 5 this year at Ikamatua.

As so often in the shearing industry, it’s been a family thing. Haare’s father, who died in November, was a shearer and his mother is still working as a woolhandler.

His father did not shear in competitions, but father-of-two Haare said: "He helped me through my show career, he was the best shearer in the world in my eyes, even with no show or speedshear titles."