Sheree Taylor competes in the single-handed women’s sawing event in Cromwell on Sunday.
A pact made with her late husband has led axewoman Sheree Taylor to the South to compete on the gruelling Christmas woodchopping circuit for the first time.

His loss left her considering her future in the sport and her grief was still raw, but somehow she had rallied, she said.

"We always promised to come to the South Island circuit and now, here I am."

In her 28-year career she amassed eight world titles individually — the first in 1995 at a single-handed sawing world contest in the US. She would go on to win it six times. 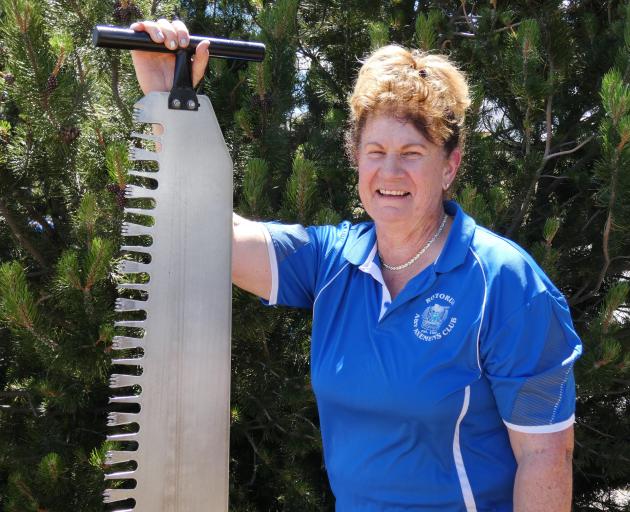 Mrs Taylor shows off the single-handed saw, which is but one of the tools she uses as she competes across multiple disciplines in woodchopping. PHOTOS: JARED MORGAN
Her other world titles include two individual underhand chopping and two Jack and Jill (man and woman) sawing titles with Mr Taylor, making 10 in total.

"We did Jack and Jills through America and Australia and all over."

Her New Zealand national titles were "too many to count".

Not bad for a sport she took up at age 38, encouraged by her husband, following a netball injury.

Without her wingman — or axeman — she almost gave it away.

Renewed purpose came from the men and women who saw her as a coach and mentor, Mrs Taylor said.

"Since my husband died I wanted to step away from it but guys came in and asked me to coach them."

At age 66 she took pride in establishing the New Zealand women’s team, the Axe Ferns.

Otago/Southand contest commentator for 32 years Peter Templeton, of Riverton, said Mrs Taylor was an inspiration in a sport growing in popularity.

Covid-19 had changed the game on the southern Christmas circuit this year with a large North Island contingent who might otherwise have been competing in Australia — including Mrs Taylor.

Back-to-competitions would dominate this week, including Otautau today, Riverton tomorrow , Thursday in Colac Bay, and the "big one" — Tuatapere on New Year’s Day, Mr Templeton said.

"I reckon it’s a travelling circus and not a Christmas circuit."