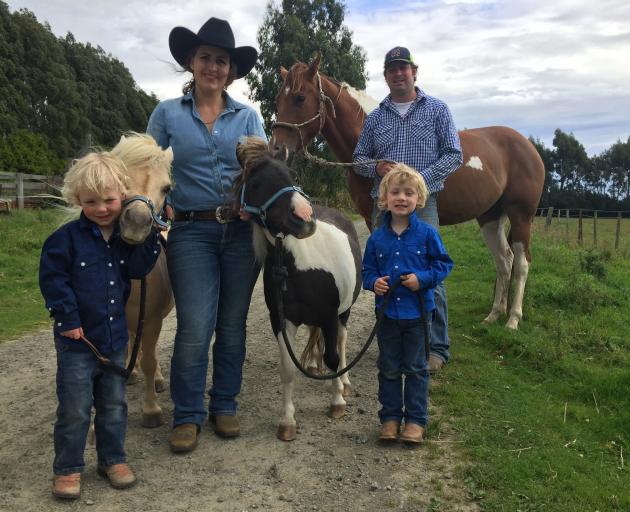 Casey Evans with her husband Rhys and their 3-year-old twin sons, Luke (left) and Cole, with their miniatures Honey and Sugar. PHOTO: MARY-JO TOHILL
A year on from landing an ambassador role for major clothing brand Wrangler, Catlins songstress and farmer Casey Evans has been signed on as a sponsored rider, despite a serious setback during the Covid-19 lockdown, as Mary-Jo Tohill reports.

The New Zealand pin-up girl for jeans and Western apparel company Wrangler is not a six-foot model and built like a giraffe.

In fact, Casey Evans would describe herself as more low to the ground with her feet firmly planted on Catlins

She’s an Owaka farmer, horse trainer, mum and a teacher. And she sings — oh yeah, the cowgirl sings.

Her voice is probably what Casey is best known for at rodeos and gigs throughout Australasia, along with her presence on the rodeo circuit and prowess on the back of a horse as a barrel racer.

It’s what got Wrangler’s attention, when she fronted up to the company, which began in America in 1947 and started in Australia in 2003. "I approached Wrangler for sponsorship for Southern Barrel Racing. They had none available but they asked was I interested in being a ambassador for their clothing.

"I did the application and thought, yeah right, that'll never happen, and didn't think too much about it. I figured, what have I got to lose?"

To her delight, the company that makes jeans and a premium Western clothing line, chose her as the New Zealand ambassador.

"They wanted their clothes to be worn by real people, and by people of all shapes and sizes. That was why I was asked. I'm definitely not a model shape."

That was a year ago and Wrangler has just signed her for another year, and as a sponsored rider.

"I thought it was going to be a short-term thing. But it’s worked beautifully, because I practically live in the clothes anyway, and it works in with the family life, the horse training, singing and rodeo."

She is also the brand ambassador for Twisted X Boots and Thomas Cook & Pure Western.

There are no professional photographers on her "shoots". It’s usually husband Rhys taking the pictures on his cellphone, which are posted on social media feeds with a howdy doody message from Casey about what she’s up to on the farm and in life.

"I sing all the time, around the farm, on the back of a horse. My husband’s always recording bits of songs. About 90% of my songs come to me when I'm driving, when that part of your brain is freed up."

Between songs, she's getting a big kick out of seeing the burgeoning talent of her 3-year-old twins Luke and Cole.

They’re already playing ukulele and barrel racing on the lead rein, on their miniature horses Honey and Sugar. But it won’t be long until they’re taking the reins.

"They competed at the Mataura rodeo. They loved it — they especially loved getting $5 for (placing) third and fourth."

Like her children, she rode from the age of 2 and grew up rurally, in her case, Middlemarch. Her husband Rhys, who hails from Wales originally, brought her to the Catlins to farm. She attributes her singing and musical talent to her grandfather, Russell Kennett, of Dunedin, who died last year at the age of 92.

"He would be my biggest driving force. His violin is in my music room at home."

Life for the 32-year-old may seem as sweet as her vocals. But it has not been without serious health and physical challenges.

In week two of Covid lockdown, she was out riding Skipper, a 3-year-old at the time. Because of his placid nature, he may end up being her banner and trick horse at rodeos and exhibitions. But sometimes he is a little too relaxed.

"He stumbled and down he went and fell on top of me."

She dragged herself out from under him, more worried about the horse, because he was slow to get up.

She had no cellphone and had to wait until her husband came by to move some stock.

"I thought I’d just sprained my ankle, but it was really sore, with this pain in my lower leg."

Turned out she had broken her leg and she now sports a big scar where they had to operate and put pins in both her leg and ankle.

She was back riding within three months. It did not slow her down creatively either.

In fact, it was a lot like a few years back, when she was recovering from an operation to correct Chiari malformation, where a part of the brain (the cerebellum) at the back of the skull bulges through a normal opening in the skull where it joins the spinal canal.

As it did then, the enforced isolation and inactivity made her voice and song-writing much stronger and more focused.

She has released three singles, Somewhere, Take the Pain Away and Wild & Free last September, which will soon have an accompanying video. The song debuted on the Breeze radio station on release day and made No 1 on the New Zealand country charts and seventh of all genres on iTunes.

A recent music review described her voice as having a Nashville sound with an organic blend of country, pop and rock.

She was due to record some of her songs in Australia, but the closed borders and quarantine put paid to that, which means she may have to do it in New Zealand.

"I have no idea when. But I'm not worried. Things happen for a reason. I'm a great believer in that. It will all happen when it’s supposed to."

If the pandemic and accident hadn't happened, she said she probably wouldn't have taken up other public speaking engagements, such as the Otago Equine Expo last year. She was even the MC at the Millers Flat rodeo recently, where she was asked to step in at the last moment.

More used to setting up a microphone and singing in front of it than talking into it, these gigs have produced new challenges that she has embraced.

"If I hadn’t broken my leg I wouldn't have written the songs I did and I would have never talked on a mike. Without it, I wouldn’t have doors opening now.

"I’ve been around rodeos hundreds of times to sing. Singing’s different. Talking in public is a whole lot different. It’s like I’ve stepped into another role."