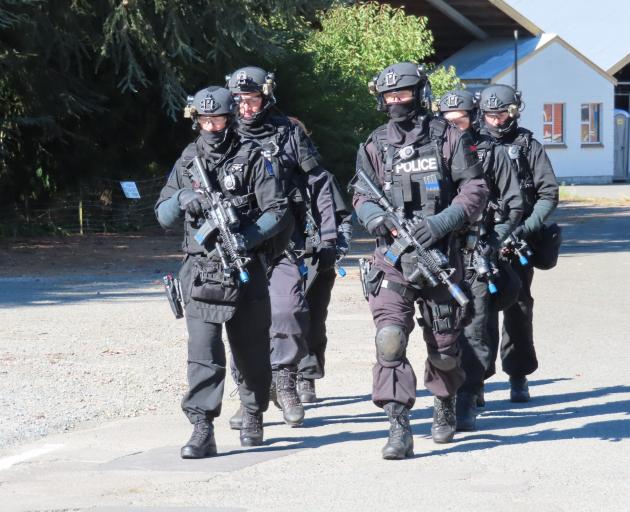 The guns shot paint rounds and blanks for the purpose of the exercise, but it was still serious business for 24 members of the Canterbury armed offenders squad (AOS). The group was boosted by role players and trainers.

The main part of the old Silver Fern Farms plant closed in 2017, with the loss of 370 jobs. Buildings no longer used include old sheep yards, slaughter rooms and chillers; several old homes, no longer occupied, are also on the grounds.

In one training scenario, officers responded to a domestic incident in one of the old houses; teams cleared each house before taking down the offender.

Mr Hatherell said the squad practised skills and drills two days a month and the Fairton plant provided a small rural setting, with challenges very different from an urban scene.

Canterbury AOS members are based in Christchurch and Timaru. They respond to and resolve situations involving firearms and are trained to cordon, contain and appeal to armed offenders.

Ashburton senior sergeant Leigh Jenkins said the AOS responded to requests or incidents in Mid Canterbury and would drive or be helicoptered in.

‘‘We request them when we consider an additional tactical option is required, such as for search warrants when there is a suspicion of firearms.’’

The last time the AOS was in Mid Canterbury was prior to Christmas.

Signs were up to alert the Fairton community about the exercise and Fairton school was notified.

There are 17 AOS units around the country, made up of 300 regular police. They were first established in 1964 after the fatal shooting of four police in incidents in Lower Hutt and Waitakere.