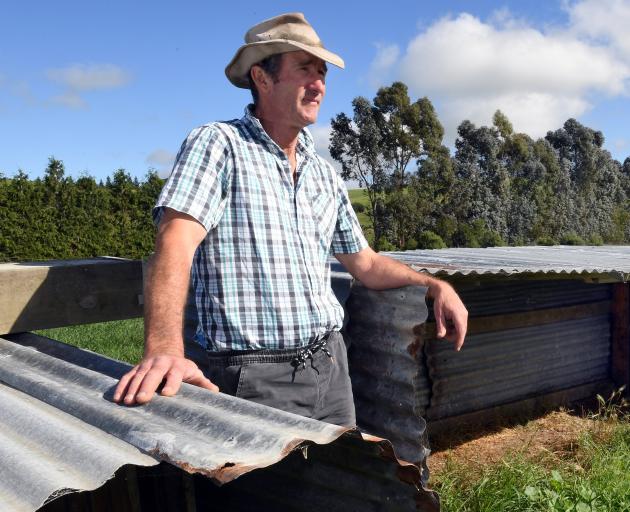 Kerry Dwyer pictured on his North Otago farm in March last year when his calf shelter sheds were sitting empty. Photo: Stephen Jaquiery
''I think I would rather have cancer than Mycoplasma bovis.''

That was the hard-hitting opening line in a letter from North Otago farmer Kerry Dwyer, to Agriculture Minister Damien O'Connor last month.

Mr Dwyer and his wife Rosie were among the first farmers affected by Mycoplasma bovis when their property was confirmed as having the bacterial cattle disease in August 2017.

It was in March last year that Mr Dwyer first publicly expressed fears over the compensation process.

Now, more than two years after having all their cattle slaughtered due to the disease, and a year after lodging their last compensation claim, they were still waiting for settlement.

But after the Otago Daily Times contacted MPI yesterday, a spokesman said director-general Ray Smith had requested an urgent review of the Dwyers' claims and MPI would pay what was owing by the end of the week.

The payment would relate to calves born in autumn, interest accrued and three calves previously declined. MPI was currently finalising the amount to be paid and thanked Mr Dwyer for his patience.

''Despite all the publicised assurances from your department that they are dealing with the disease and its effects, we are not getting any communication or action,'' Mr Dwyer wrote to Mr O'Connor.

''We do not want any special attention, rather we expect that your department staff will do their job in a timely manner.

''We ask to be treated fairly and in a similar manner to the farmers who were affected later in the response, even though your department keeps changing their rules.''

And when it came to the cancer reference, he had first-hand experience, having been treated for the disease in the interim.

''I know what I am talking about concerning cancer. Fortunately, I found a team of professionals who know their business, can make decisions and get things done.''

For more than a decade, Mr and Mrs Dwyer ran a successful calf-rearing business, buying 4-day-old calves, rearing them to over 100kg, and then selling them to other farmers. But their nightmare began when their property was confirmed with the disease.

When Mr Dwyer met Mr O'Connor in Oamaru in December 2017, he said he was assured MPI was doing its best and would handle farmer's cases appropriately.

''This has not been our experience. I publicly stated in March, 2018 that we were going to be screwed over with regards to compensation. That appears true,'' he said.

With $300million spent to date on the M. bovis response, compensation claims faced far more assessment rigour than the operation costs, he said.

The couple wanted a 'fair go'', and Mr Dwyer said MPI had changed the rules considerably over the course of the response.

''If we were to destock now, there would be some disinfection and then removal of all restrictions, and there would be no testing of new cattle coming on-farm.

''Farms can have cattle back on within two weeks. We had to wait seven months with no cattle before restocking.

''We ask to be treated the same as farmers affected later in the MPI response, by way of compensation for lost income.''

The ''usual rhetoric'' from MPI was that some claims were ''complex''.

''Well, after 12 months, the capability is more questionable than complexity,'' he said.

Mr Dwyer had not received a response from Mr O'Connor for his letter, dated September 11, but, when contacted by the Otago Daily Times yesterday, a spokeswoman for the Minister's office said a response would be ''making its way to him shortly''.

''It's a private correspondence, which Mr Dwyer is welcome to share, but we won't be,'' she said.

MPI's latest stakeholder update showed 117,096 animals had been culled. MPI had received 1462 claims and 1137 claims had been completed or with part payments.

As part of the programme's work to ''streamline'' compensation processes, the requirement for farmers to have an authorised witness sign applications had been removed.

Earlier this month, Newshub reported South Canterbury dairy farmers Aad and Wilma van Leeuwen - whose property was where the disease was first identified in July 2017 - were taking legal action against MPI, claiming the compensation process had left them millions of dollars out of pocket.

Lost perspectives if rather have cancer than Mycoplasma bovis.