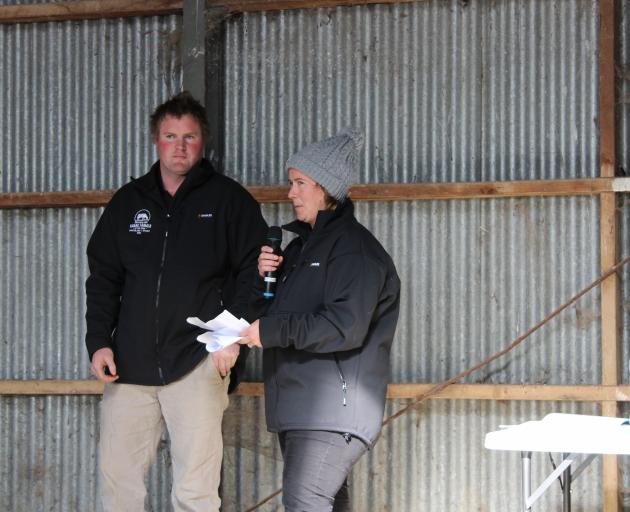 They encourage those with a similar enthusiasm to enter the New Zealand Dairy Industry Awards' Southland/Otago regional competition. Entries open on October 1.

The couple, who won the 2018 Southland/Otago regional Share Farmers of the Year competition, are 50/50 sharemilkers near Gore with 490 cows and have a 210,000kgMS target. They also have bought land to raise beef animals as an investment.

The Vallelys recently became the new regional managers for the New Zealand Dairy Industry Awards, taking over the role from Darren Stenning.

They oversee the organising committee, which includes last year's regional winners: share farmers of the year Cameron and Nicola Van Dorsten; dairy manager of the year James Matheson, and dairy trainee of the year Caycee Cormack.

All four are section team leaders and are working hard to generate interest in the competition.

"We are in the early stages but Caycee Cormack and James Matheson have been out talking to Young Farmers' clubs," Mr Vallely said.

"They talk about how it [the competition] can help careers.

"It pushes you outside your comfort zone."

There are also entrants' and sponsor evenings planned.

He and Mrs Vallely went to the national competition and for him, one of the highlights was making friends with people from other regions.

It was good for professional development and it enhanced their business operations, as well as adding to their profile for further opportunities in the dairy industry.

There were 11 share farmers entered last year in the region and they hoped to do as well this year for numbers.

He would also like to see more dairy trainees and farm managers enter as the experience was invaluable and the prizes "exceptional".

"People should give it a go," he said.

He said judges would look at the business's financials, pasture, land, staff and animal management. The entrants' community involvement and personal development were also assessed, with work and life balances considered important areas by the judges

"Dairy farming is not a sprint. It's a marathon," he said.

Judging for the first round will take place in February, with the finals round in early March.

The regional awards dinner is on March 21 at the Bill Richardson Transport World in Invercargill.