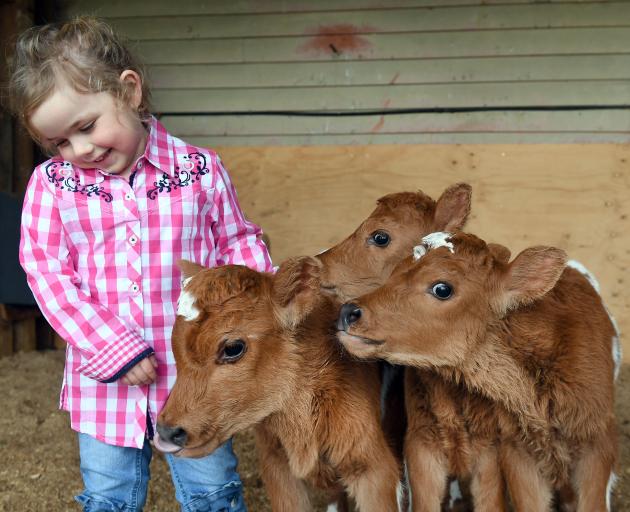 Lexi Harris (4) on the Taieri dairy farm with very rare triplet dairy calves. PHOTO: STEPHEN JAQUIERY
Holy cow - it's a girl. Or in the case of a heifer calving on a Taieri dairy farm last week, it was a gaggle of girls, handful of heifers.

The first-calver produced a very rare set of heifer triplets on the Miller family's farm at Maungatua. Andrew Miller and his father Jim had never encountered triplet calves before.

Andrew was particularly amazed the Kiwi-cross calves had all survived and were now doing well in the calf shed.

While exact figures on the probability of a dairy cow having triplets were difficult to find, it was an extremely unusual occurrence and the suggestion was made that there was a better chance of winning Lotto.

Clutha Vets Milton-based veterinarian Tom Wallbank had not encountered triplets before and he reckoned it was ``probably in the hundreds of thousands'' when it came to probability.

Then the fact the heifer was a first-calver, that there were three heifer calves and that they all survived, added up to being a particularly unusual occurrence. Dairy cows were also less likely to have triplets than beef cows, he said.

Calving was going well throughout the region and the weather was much better than the ``horrendous'' conditions last year. There had been reports of some big calves, Mr Wallbank said.