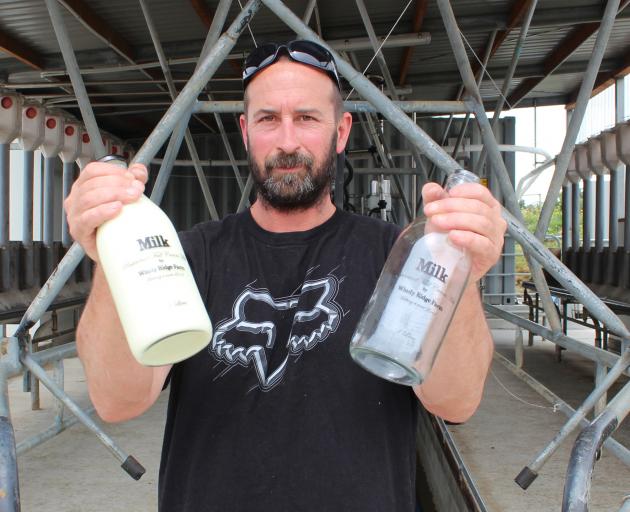 Windy Ridge Farm owner-operator Andrew Moir told the Otago Daily Times yesterday he was shocked to discover his "old-fashioned" bottled, pasteurised full-cream milk would no longer be sold from the Foodstuffs NZ-owned chain of small town stores, despite the continued wishes of some store owners.

Mr Moir said a Foodstuffs representative had contacted him last month with the news, explaining the change was because of an exclusive South Island "white-milk" contract with major supplier Goodman Fielder.

Unwilling to single out specific stockists for fear of damaging their relationships with Foodstuffs, Mr Moir said some Four Square owners had been "ropeable" on hearing the news.

He said the freeze-out was even more frustrating as he had unsuccessfully tried to gain "approved supplier" status during recent years, which he believed would have secured his ability to continue to supply the stores with some of the 3000 litres of milk produced weekly by his herd of 35 cows.

"It's going to have an impact. Up till now, St Clair has taken about a fifth of our entire production, and you can't beat Foodstuffs in terms of reaching the market, unfortunately. It'll knock us back for a few weeks, but we're working hard on bridging the gap."

Mr Moir said he had found new suppliers for most areas, including Leckies Butchery, which is next to St Clair Four Square.

When contacted by the ODT, the St Clair store manager declined to comment, and referred inquiries to Foodstuffs communications.

In a statement, Foodstuffs NZ said it supported local suppliers, and appeared to leave the door open for Windy Ridge to make a fresh application to have its milk stocked by the chain.

"We pride ourselves on being 100% New Zealand owned and operated, and stocking products that reflect the local community in our stores," Foodstuffs NZ head of external relations Antoinette Laird said.

"Stores are given some liberties to stock products of their choosing, but are asked not to sell unapproved suppliers' products.

"We welcome all suppliers to complete the requirements that are necessary for approved supplier consideration."

This contradicted what he had been told, Mr Moir said.

"We seem to have different people saying different things, so I don't know where that leaves us, really. As much as I'd like to work with Foodstuffs, your customers want a reliable supply, and we believe in loyalty to our stockists."

Owaka Four Square customer and "committed" Windy Ridge drinker, Les Aimers, said he had enjoyed being able to pick up "real milk" from his home town store, before its recent disappearance.

"To me this smells like big conglomerates calling the shots and strangling the little guy, and it stinks.

"Four Square has always been about keeping it local, and what could be more local than milk from just up the road?

Feels like a good old fashion boycott coming everyone should stop buying there milk from Foodstuffs run stores . The customer tells the market what we want not the big fat wholesaler . STOP BUYING GOODMANS MILK only buy local . Hurt Foodstuffs bottomline