Fonterra has reduced its 2021-22 forecast farmgate milk price range, citing global events which have resulted in short-term impacts on demand for dairy products.

In particular, the co-operative said it had been caused by Covid-19 lockdowns in China, Sri Lanka’s economic crisis and the Russia-Ukraine conflict. 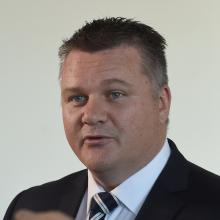 In a statement, chief executive Miles Hurrell acknowledged while it would be disappointing for farmers, the change in global dairy prices was coming off record high levels.

At a midpoint of $9.30, it would continue to be the highest forecast farmgate milk price in the cooperative’s history and contribute almost $14 billion into the country’s economy.

While the long-term outlook for dairy remained positive and global demand and supply was expected to be more balanced over the rest of the year, the short-term impacts had flowed through into pricing on the Global Dairy Trade platform, Mr Hurrell said.

For example, average prices for whole milk powder, a key driver of the milk price, had decreased by 18% over the past four GDT events.

‘‘As an exporter to 140 countries we deal with these kinds of global events all the time, but right now we’re seeing the impact of multiple events. Coupled with inflationary pressures, it’s not surprising to see buyers being cautious,’’ he said.

While restrictions had eased to a degree in Shanghai, the broad pressure on Chinese supply chains remained acute.

‘‘At this stage, we continue to expect that generally this price weakness will prove temporary. The experience in other countries is that Omicron waves eventually pass. And in Shanghai at least, this seems to tentatively be playing out.

‘‘However, some of the lost demand in the food service industry [think pastries and desserts] over this period will not be recovered. Consumers are still likely to be eating dairy at home, but the mix of products is different,’’ he said.

In a recent report, ANZ said it expected milk prices to remain at elevated levels next season but it had revised down its forecast 80c to $8.50.

It expected dairy commodity prices to continue to fall in the coming months but relatively low global milk supplies were expected to put a floor under prices later in the year.

Global risks were highly elevated at present which was driving uncertainty; the Ukraine situation was adding pressure to what was already an overheated commodity market.

Oil prices had skyrocketed but continued to seesaw on headlines about how the war was progressing. Energy commodities were already in tight supply before the invasion and the supply situation was now a lot less certain.

High gas prices were pushing up fertiliser prices which, in turn, was pushing up the prices of grain and food in general.

The cost of producing milk was rising, particularly in the northern hemisphere, where indoor farming systems meant much greater exposure to high prices for fertiliser, grain and fuel.