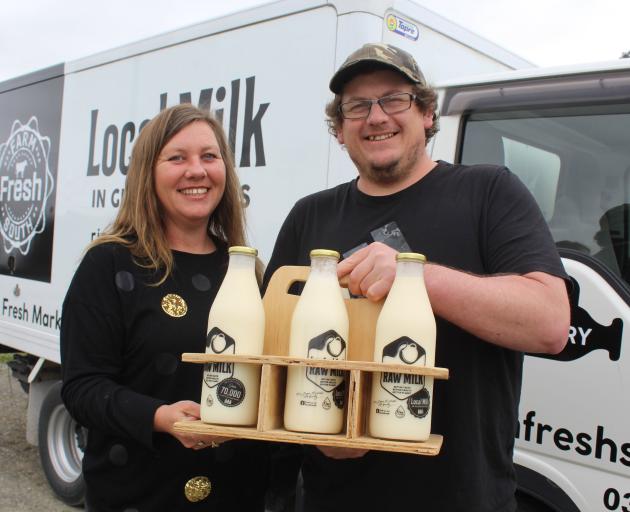 Farm Fresh South owners Melissa and Logan Johnson, of Woodlands, have launched their second bottled, pasteurised milk vending machine outside Bliss Cafe in Windsor, Invercargill. PHOTO: ABBEY PALMER
When Melissa Johnson first suggested the idea of selling raw milk in bottles from a vending machine, her husband thought it was a "stupid idea for hippies".

Just over three years and two vending machines later, the Southland partners in life and business are delivering hundreds of bottles to thousands of customers across the South every week.

Following a decision to downsize and do their own thing, the former large-scale contract milkers started their milk business, Farm Fresh South, in Woodlands, with 35 calves in 2017.

She then persuaded her husband, Logan.

"People love it, they say it tastes better [than heavily pasteurised milk], there’s a lot of people who like the idea of it being in glass bottles because it takes them back to old times, and there’s also the environmental element," she said.

The original plan was to solely run the vending machine at their Woodlands milking shed and enjoy a quiet life.

However, slowing down was not on the cards for the Johnsons.

As well as the on-site vending machine, the pair, with the help of two drivers and an "all-rounder", delivered hundreds of bottles of raw and pasteurised milk each week, and also supplied shops, cafes and local supermarkets from Wanaka to Rakiura/Stewart Island.

They then added vegetables, meat, eggs, nuts and other goods from Southland and Otago producers to their delivery run.

"We haven’t had a day off since ... we have a lot of area covered when it comes to deliveries."

Mr Johnson said he was waiting in the car outside the cafe when the idea popped into his head.

"I saw how much foot traffic there was with the supermarket right there.

"I ended up pulling the car over on the way home to ring up the owner and ask them [if we could put a machine there]."

Bringing another vending machine down from Northland, the movers had not tethered properly and it fell apart.

It took a few weeks to get it fixed.

Now up-and-running in the Invercargill suburb with a busy customer base, they had not ruled-out establishing more vending machines around the region and expanding the business further.

"The goal is to make sure everyone has a chance to try milk how it should be."

In a week that celebrates news of a Coca Cola ad this is good to read. Well done the Johnsons.

From Wikipedia
Raw milk or unpasteurized milk is milk that has not been pasteurized, a process of heating liquid foods to kill pathogens for safe consumption and extending the shelf life.[1] Proponents of raw milk have stated that there are benefits to its consumption, including better flavor, better nutrition, and the building of a healthy immune system. However, the medical community has warned of the dangers, which include a risk of infection, and has not found any clear benefit.[2]