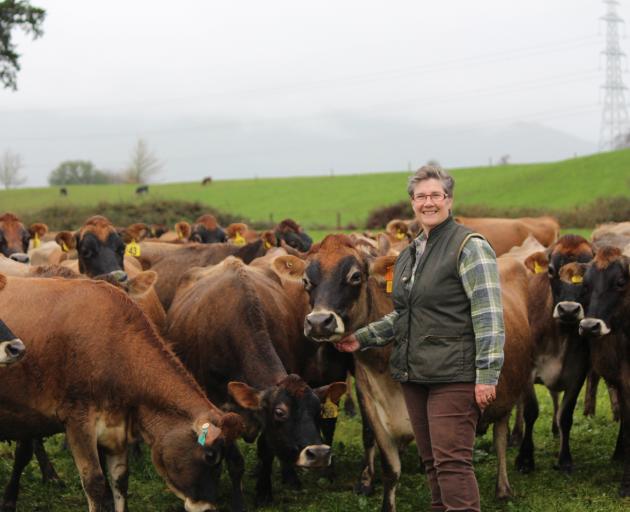 Lewis Road founder Peter Cullinane, who spoke about the initiative at Jersey NZ's conference in Dunedin last week, said the Jersey cow was "rightly famous" for her milk. 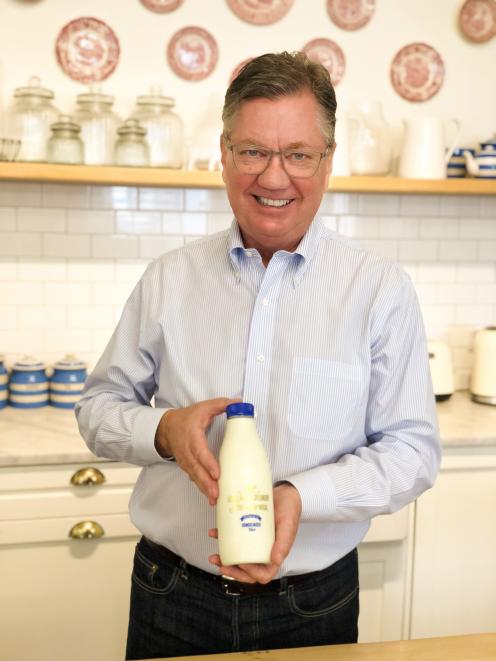 Lewis Road Creamery founder Peter Cullinane with Jersey milk which is going on the market nationwide. Photo: Supplied
"It is richer, creamier, with higher butterfat and a more velvety texture. A single-breed milk really lets those qualities shine."

For Mrs Gibb, the development was an exciting move.

"This has been a long time coming - I was always envious when travelling overseas and seeing the fuss that was made of pure Jersey milk in other countries," she said.

While the Jersey had been a "little bit of a poor cousin" of other dairy breeds for a long time, it was back in fashion.

There had been some misunderstandings with consumers believing that fat was bad. But now consumers had "woken up" that fat provided a lot of nutrition in its own way and it also provided flavour.

But the strength of the Jersey breed was not just about fat; Jersey cows were also very efficient milkers, a lighter animal in terms of environmental footprint - "she's actually a green cow, not just a brown cow" - and was renowned for better fertility and ease of calving. The Jersey was also a manageable size to handle and adapted to different climates.

Now breeders of crossbreds were wanting more Jersey in their breeds and semen sales were up 20%, she said.

Mrs Gibb, who farms in the Waikato with her husband Russell and daughter Natalie Dyson, is the daughter of a dairy farmer - her grandfather milked Jersey cows - and she married a dairy farmer.

In 2000, the secondary school teacher decided a new challenge was required and she studied at Massey University as an extramural student to complete an agricultural degree.

In 2008, she left teaching to become more involved in the business, particularly at the strategic and directional level.

When she was appointed in 2016, she was the first woman to head Jersey New Zealand since it was incorporated in 1902.

Jersey NZ has about 600 members, which included youth and associate members, and there were now three female directors.

She was enjoying her tenure as president, saying she had "learned heaps" and met some very interesting people in the industry.

There was some "fascinating stuff" happening, such as the Lewis Road initiative which had been launched to coincide with World Milk Day on June 1.

Youth was a strong focus for Mrs Gibb and she formed a Youth Council for Jersey NZ to provide a training ground in governance for young people.

It was encouraging to see the increase in the number of children entering the Jersey class at the New Zealand Dairy Event in Feilding.

Such events were where they learned the passion and a desire to go farming - and hopefully farm Jerseys, she said.

The mood at the conference in Dunedin was buoyant, given the state of the industry. Issues were relevant to all farmers, not just Jersey farmers, around environmental and carbon footprints.

But Mrs Gibb was quietly confident the Jersey breed was in a good position to meet those challenges.

The conference included the 26th Jersey Pride sale of elite Jersey genetics which was held at Forsyth Barr Stadium.

The five cows, five rising yearling heifers and six in-calf heifers offered were displayed as power-point presentations, rather than being there in the flesh, and averaged $5260.

Both bloodlines were sought after by artificial breeding companies and both heifers would be flushed for embryos, Ross Riddell, of Link Livestock, said.