Job offers roll in for Trainee of the Year 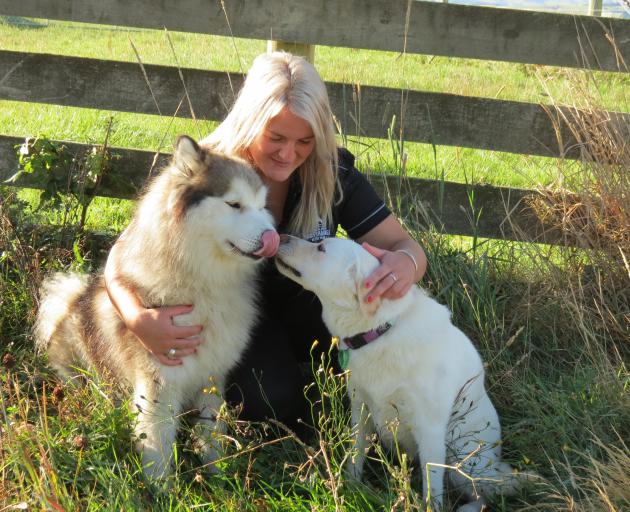 Caycee Cormack, of Heriot, is the new Southland/Otago Dairy Industry Awards’ Dairy Trainee of the Year. She loves working in the industry and is preparing for the national competition in Wellington next month. When not working, she relaxes with Cash the husky, and Poppi, the husky/Labrador cross, which she is babysitting. PHOTO: YVONNE O’HARA
When Caycee Cormack left school she had intended to study physical education at Otago University, as she played a lot of sport.

At that stage she had not even considered working in the dairy industry as a career option.

Now she is the Southland/Otago Dairy Trainee of the Year and has a dozen job offers to consider.

This was the second time Ms Cormack had entered the competition - she placed third last year.

The win was even more remarkable because when she went through the final judging, she had only been out of hospital for two days after having her appendix removed.

Ms Cormack said she enjoyed the challenge of the competition.

"The positive feedback from last year helped me gauge my strengths and weaknesses, enabling me to focus on areas that needed improving.

"I love that challenge, and the contacts I have made [during the competition] have been awesome."

She spent two years at university before deciding her heart was not in her choice of study and decided to take a gap year off.

Dairy farmer John-Mark Lietze, of Heriot, suggested she see him for a chat.

"Every day is a bit different and I like how we can progress through the dairy industry and push ourselves, and go as fast or as slow as we want.

"The only drawback sometimes are the long hours, especially through calving and mating."

Ms Cormack worked on the Lietze's 600-cow farm for three years, then moved to a 2IC position for Stefan and Holly Roulston on their 220ha Heriot property.

But she recently left the job.

Since her win, she has received about a dozen job offers and is looking at the options.

"I just want to keep bettering myself."

She has also had several offers to help prepare for the national competition in Wellington on May 11.

"My goal is to have my own dairy farm, but I also would like to go either contract or sharemilking," she said.

She is still enthusiastic about sport and has organised the social touch competition for Heriot, in which 15 teams take part.

She is also involved in fundraising for Tapanui's new rest-home.

Ms Cormack will speak at the Southland/Otago dairy awards field day on the Van Dorsten's property in Outram on April 17.