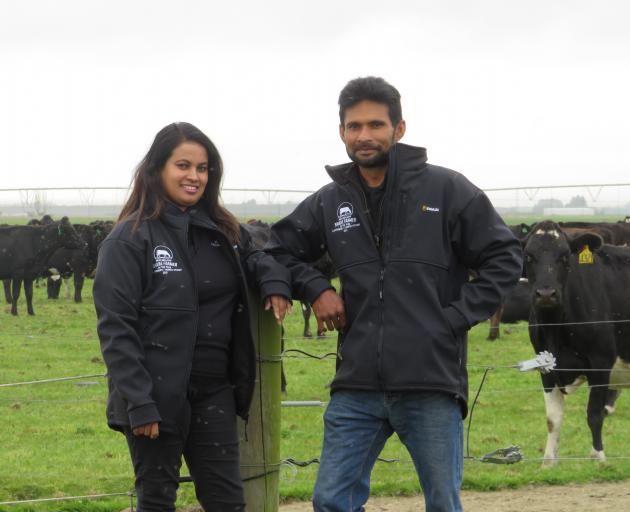 Dairy farmers Nadeeka and Dinuka Gamage love being their own bosses and working outdoors with animals. PHOTO: TONI WILLIAMS
Dairy farmers Dinuka and Nadeeka Gamage are living the dream.

They are passionate share farmers on a 245ha Dairy Holdings farm at Ealing, milking 980 cows, and are finalists in the New Zealand Dairy Industry Awards, Share Farmer of the Year category.

They won the final of the Canterbury-North Otago region and will find out this weekend how they fared. The national finals are in Hamilton on Saturday.

Dinuka and Nadeeka love being their own bosses and working with animals in the outside environment.

“Outside is our office now,” Dinuka said.

It is a lifestyle they were pleased to have and one which has slowly taken shape over the years since Dinuka first arrived in New Zealand.

The couple were high school sweethearts from Kandy, Sri Lanka, and moved to New Zealand in the late 2000s.

Dinuka came out first, in 2008, gaining an entry-level position with Wayne and Suellen Pamment on their 880-cow dairy farm in rural Kaikoura.

Dinuka learned a lot from the Pamments in his first year in the industry.

Then when the farm was sold, he headed inland to work for Mark and Penny Fleming at Culverden, milking 950 cows.

He also had James and Ceri Bourke as dairy industry mentors.

By the time Nadeeka arrived with their two young sons, Dinuka was in a better position as a dairy farm worker, moving up the ranks from herd manager to 2IC and then farm manager.

He was with the Flemings for eight years.

It was a fully irrigated, system four farm, he said, in a good community.

‘‘It was a great learning opportunity.’’

Dairy farming was a far cry from the large rice paddy farm where he grew up in rural Sri Lanka.

He holds diplomas in agribusiness management from New Zealand, as well as agriculture engineering and a postgraduate diploma in marketing from Sri Lanka.

Just before leaving Sri Lanka, he was visiting farmers selling animal health products. Those visits reignited his dream of farming.

He had learned about New Zealand dairy farming when he was studying, so when the chance to move south came up, via a New Zealand recruitment agency, he took a leap of faith for the future of his family.

And it has been a successful move. Not only has Dinuka extended his qualifications with the Primary ITO Level 5 Production Management, Level 4 Dairy Farming and Biz Start from DairyNZ but they became New Zealand citizens in 2018.

The Gamages, with their business LuckCow Dairy Ltd, are in their fourth season as share farmers with Dairy Holdings in Mid Canterbury.

They like the district’s vibrant multi-cultural community and its central location. They have also travelled extensively around New Zealand.

They have three full time staff, milking 980 cows in 16-hour milkings through a 48-bail rotary shed.

And in the industry competition, won merit awards for their leadership and business performance.

However one of the challenges facing them of late, had been finding — and keeping — key staff. They train all their staff to know every aspect of the job, which carried its own set of challenges once they were trained and sought career advancement.

The Gamages have enjoyed the preparation going into the industry awards, especially networking with others in similar situations.

They saw the ongoing support from their farm owners as a strength of their business.

But were also proud of their own progression through the dairy industry, regularly setting goals for themselves to advance to farm ownership in the future. 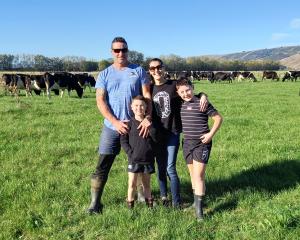