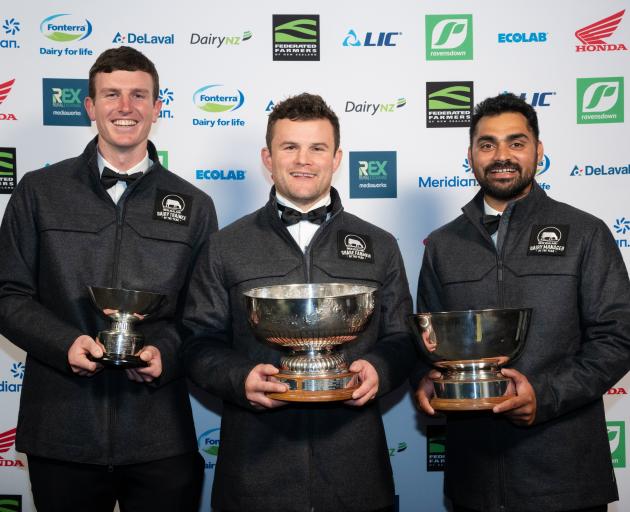 Dairy trainee of the year Peter O’Connor (left), sharefarmer of the year Will Green and farm manager of the year Jaspal Singh celebrate their successes during a function in Christchurch. PHOTO: DAIRY INDUSTRY AWARDS
He used to be an information technology student in India.

Now Waimate’s Jaspal Singh is the best dairy farm manager in New Zealand, claiming the title at the Dairy Industry Awards national final in Christchurch at the weekend.

It was a clean sweep for the Canterbury/North Otago finalists; Will Green was named Share Farmer of the Year and Peter O’Connor won Dairy Trainee of the Year.

Mr Singh was an information technology (computer applications) student in India and came to New Zealand to further his studies in 2014.

After completing his degree the following year, he joined the dairy industry as a farm assistant in Mossburn and is now farm manager on Mark and Carmen Hurst’s 220ha, 800-cow property at Waimate.

Reflecting on the win, Mr Singh described it as a joyful occasion. He also felt a sense of relief it was over as a lot of hard work and effort had gone into it.

Asked the secret to his success, Mr Singh said he endeavoured to do everything "perfect" on the farm, especially around issues such as the environment, along with livestock management and the milk that left the farm was the "best quality milk".

He also endeavoured to keep updated with regulations, including around the likes of intensive winter grazing.

He moved to New Zealand for a better future and speaking English was the first challenge but that was something he had worked on. The change from IT to dairy was also big.

"But I had a positive attitude," he said.

He had no regrets about the move, saying it had given him a new career and a happy and rewarding life. There was a great team on the farm and everybody was valued.

For the coming season, there was an opportunity on the same farm as a variable order sharemilker and his long term goal was to be a farm owner.

Head judge Gray Beagley said Mr Singh stood out as professional, detailed, diligent and possessed a desire to succeed with a dedication to growth.

“From the moment we entered the farm gate to the time we left, we witnessed an immaculately presented farm and a polished and professional presentation which highlighted Jaspal’s knowledge and sense of responsibility for the farms management and performance.”

He provided his team with clarity around why things were done a certain way, not just the how, with policies and procedures that ensured a consistent high-quality outcome, the judges said.

“Jaspal’s attention-to-detail was incredible and he demonstrated best practice across the board.”

Interview judge Rosemarie Costar said the relationship between Mr Singh and his wife Ruby was a business strength.