Air of inevitability in switch to orcharding 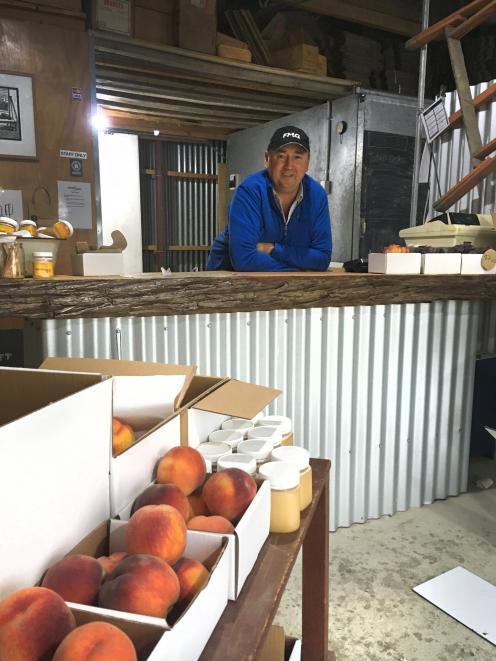 As he works alongside son Hamish, orchardist Mike Darling acknowledges it is a "laugh a minute" at the boutique orchard, which is very much a family-run operation.

Hamish, a fourth-year law student, is home for the university holidays while his brother Matt, a geological engineer, "comes here and creates a bit of havoc", Mike quips.

Mike’s wife Helen, executive director of the Asia Pacific Centre for Food Integrity, has a busy calendar and is often away from home, and the 10ha property on the Luggate-Cromwell Rd is also an ideal retreat for her.

"It’s definitely a family affair. If this was just about me, I wouldn’t be able to manage it," Mr Darling said.

From picking fruit under the hot Central Otago sun to chatting with customers in the orchard shop, it is a very different life to Mr Darling’s previous career as a detective in Dunedin.

But it is also one that he has embraced, although the orchard industry was not entirely unfamiliar to him, as he grew up on an orchard in the Teviot Valley. His brothers Mark and Stephen are both orchardists.

"I sort of thought it looked like a really hard way of making a living so I joined the police instead," Mr Darling recalled.

He spent 19 years in the police force. It was an exciting career and he enjoyed "every bit of it" but it got to the stage that he was looking for another challenge.

He helped set up Iso-trace at the University of Otago, where he was forensic manager, and also worked at Oritain where his wife was founding chief executive.

Mr Darling’s father mentioned a small orchard was on the market near Cromwell and Moorpark and Mulberry was bought at the end of 2012. 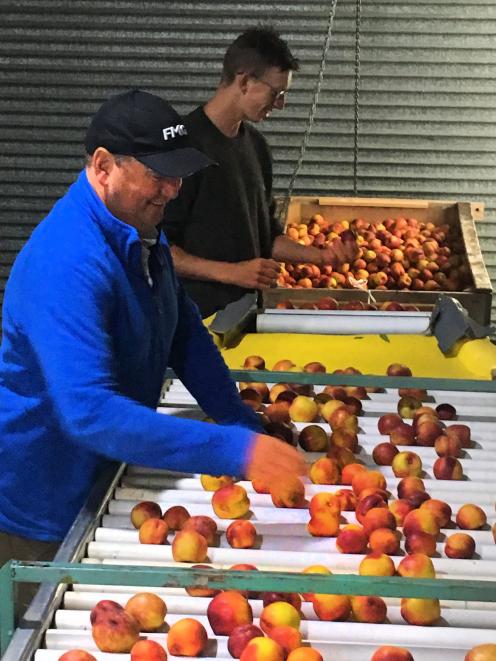 Mike Darling and son Hamish sort nectarines.
"Maybe it was always in my DNA, this was always meant to be ... a bit of a calling, I suppose," he said.

A huge challenge lay ahead as the orchard had not been operating for about seven years and it  needed "a lot of love". But that challenge was part of the appeal.

"I thought, that’s really cool; we’ll go and create something new — a new orchard, a new brand, a new business," he said.

They concentrated on older, heritage varieties, such as Moorpark apricots, seeing real value in embracing them, and also liked "the quirky sort of things" like mulberries which were an "amazing wee fruit".

Being a little different set them apart from other orchards. They realised they could not compete with the big players in the industry and  concentrated on domestic supply, with fruit also destined for places like Te Anau, Ranfurly and Oamaru.

Asked if the venture had been a steep learning curve, he said "yes and no". He was lucky to have amazing support from his family and that orchard background.

Hooking an implement on to the power take-off on the tractor was something that he knew but understanding tree physiology and pruning was something else.

Shortly after buying the property, Mr Darling required heart surgery which "caused a few wrinkles" and forced him to focus on the most important things in his life.

While he was recuperating, his brother turned up with a truckload of peach trees and planted them on the orchard. The Darlings have planted several thousand stonefruit trees on the property.  They planted the trees themselves and built the grader  by welding together bits and pieces sourced from his brother. The plan was to plant another 600-800 trees and then stop.

People came to Central Otago for a "unique Central Otago fruit experience" and you could not have a business and sell sub-standard fruit, Mr Darling said. He enjoyed the contact with "amazing customers" and chatting with them during the fruit season and answering their queries.

"People want to come in and want to have interaction," he said.

Mr Darling  left fruit on the trees longer to develop its sweetness and flavour so the eating experience for the customer was improved.

He was very excited about a new, early variety of apricot planted last year which had an aromatic perfume and was juicy and sweet. More of that variety would be planted this year.

As for his own fruit preferences, he liked Moorpark apricots, as it brought back memories of childhood and of what "fruit should taste like", he said.

It was a great lifestyle and he had no regrets about making the career switch.

"When you get up in the morning and are out there picking amazing peaches that somehow survived your management programme, it really is satisfying. Maybe I was always meant to come back and do this. Maybe it was an inevitability," he said.