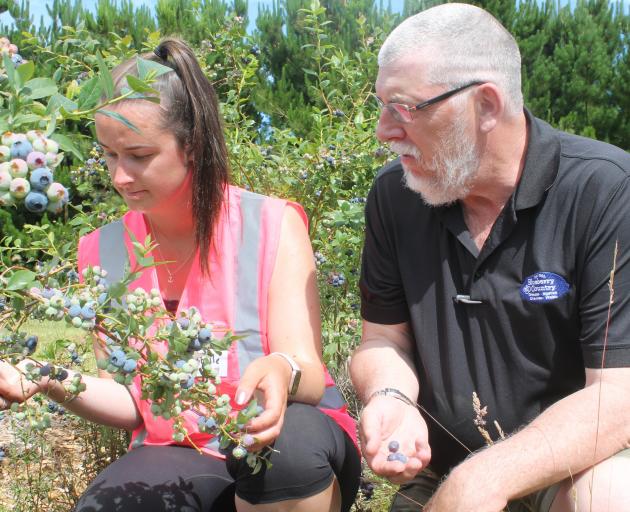 Blueberry Country picking supervisor Isabelle Hazlett and general manager Simon Bardon check the branches at the Otautau orchard. PHOTOS: LUISA GIRAO
A Southland blueberry orchard manager is grateful the operation has not been hit as hard as those of Central Otago’s fruitgrowers despite a late start to the season.

Blueberry Country general manager Simon Bardon said the Otautau orchard would usually start its season around new year but the wet ground meant a delay of about two weeks.

However, the hiccup did not dampen his enthusiasm for growing blueberries.

Mr Bardon said he was really excited about this season and hoped the orchard reached its target.

"It will [be] all go from now. We just need more of those hot and good days.

"The truth is that every farmer these days is nervous [about the weather]. It is just the nature of the beast." 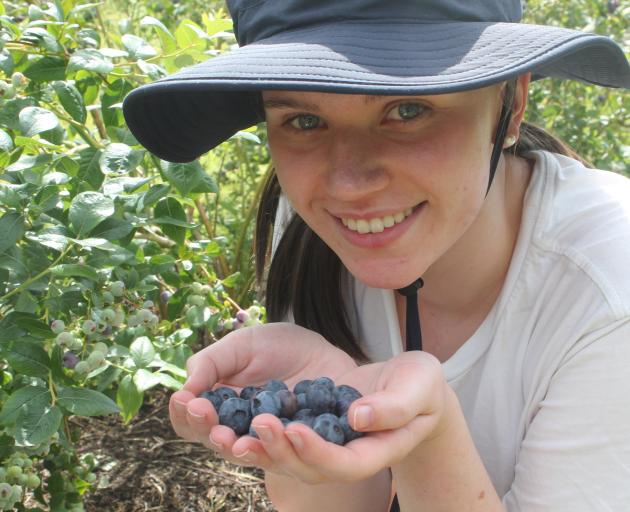 Annabel Murphy, of Invercargill, is enjoying her first season of blueberry picking while she is on holiday from university.

Despite the growing season being affected by the weather, the big stock losses in his orchard were due to birds, Mr Bardon said.

The company lost on average five tonnes of blueberries a week, which meant about 10% of its production.

"I think every crop orchardist faces challenges and — yes — we are fortunate and we have not yet had to face the challenges they [Central Otago fruitgrowers] are facing.

"But I certainly learnt never to say never. We have been lucky — so far."

Before the season started, Mr Bardon was worried about not finding enough workers as the majority used to be backpackers or travellers.

About 100 people went to an open day at the orchard looking for a job, and Mr Bardon managed to hire 85 people for the season.

One of them was 19-year-old picker Annabel Murphy.

As she was on holiday from university, the Invercargill law student decided it was the "perfect job".

"It is quite peaceful and people are very nice."

The orchard will open its doors today for Pick Your Own until at least the end of the school holidays.

It will be open from 8am to 6pm and visitors will be charged $12.50 per kilogram of blueberries.

People are asked to take sunscreen and water due to the hot weather.