Carving out a place for the new fruit on the block 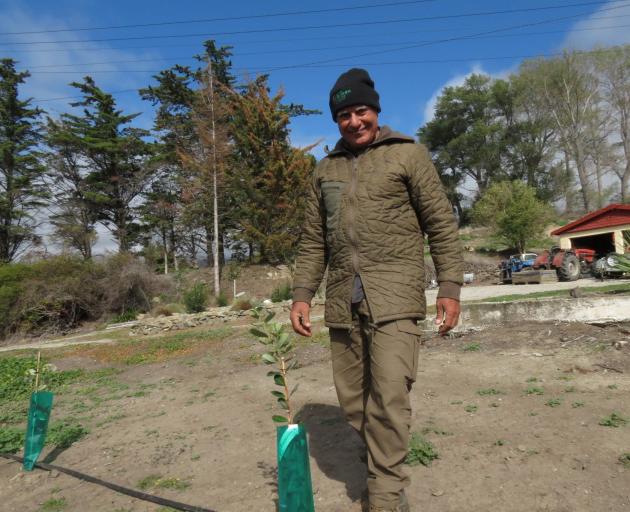 Orchardist Mal Dhillon hopes feijoas will prove commercially viable on his land and in the wider Roxburgh area. PHOTO: TRACIE BARRETT
A Roxburgh orchardist hopes a trial planting of feijoas on his property will not only allow him to diversify his crops, but could have flow-on effects for the entire region.

Mal Dhillon has 9ha of land on hills overlooking Fruitlands-Roxburgh Rd where he grows cherries and apricots for domestic and export markets.

Like many growers, the past few years have been difficult for him, with last year’s crop all but destroyed by heavy rains over the New Year, and this year much of his export fruit left rotting on the tarmac because of a logistics problem at the airport.

"Cherries are such a fickle fruit," he said.

Mr Dhillon previously owned a 2700-tree orchard in Matamata with what he said was the biggest number of feijoa trees in the area, grown alongside blueberries, persimmons and nashi pears.

He said feijoa trees were hardy and could handle -4degC frosts, with only the flowers and fruit affected.

He had decided to plant a section with 90 feijoa trees, 15 each of six varieties, all of which are early ripening so the fruit could be picked by April. The trees were two years old, so already established.

He deliberately chose a section about 2degC cooler than the majority of his property, with a mix of soil types to give him a better idea which trees grew best in which soils, and how the cold affected them.

The trees planted about 10 days earlier were already showing new shoots, which indicated that their root systems were getting established, Mr Dhillon said.

Gareth Noble, owner of Recharge Bar in Clyde, said he had a feijoa hedge at his home with 10 or 12 plants which grew really well in the Central Otago climate, producing bumper crops every winter.

He did not offer feijoa among his fresh cold-pressed juices at present but said he would definitely do so if they were locally grown.

Mr Dhillon said feijoas were less prone to damage from bugs than other fruits, and birds did not strip the ripe fruit as they did with cherries and grapes, but the trees still had to be monitored and were labour intensive for picking and packing.

If commercial plantings proved viable in the region, that would help retain staff, he said.

"Cherries finish in February and feijoas would start picking in March through April, and after that it’s time for apples."

Mr Dhillon said he should have a good idea of the trees’ viability after next spring.

"If it doesn’t work, the initial outlay is nothing -  it’s just labour and trees," he said.

"If it does work, it’s good for the whole area."