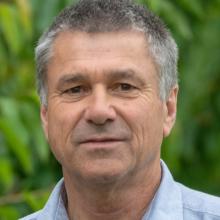 While a public meeting in Tarras on Wednesday night heard from a range of speakers opposed to Christchurch International Airport Ltd’s proposal, Ross Kirk, of Hortinvest, could see positives for the cherry industry.

"We’re quite excited by the prospect, to be honest."

Most export cherries are trucked over the Lindis Pass and flown to Asian markets from Christchurch or Auckland airports.

Mr Kirk said a Tarras airport would save "a hang of a lot of time" trucking the fruit.

It would also open up the possibility of chartered cargo aircraft taking cherries direct to overseas destinations, or to Australia to connect with even bigger aircraft.

Mr Kirk said there were many new "quite significant" plantings and the crop was likely to double in the next five years.

Some cherries had been exported through Queenstown Airport "but realistically it is not a viable long-term solution", he said.

"Having an international airport that can take jets, right on our doorstep, would be fantastic."

Summerfruit New Zealand chairman Tim Jones said it "would be of interest" to the cherry industry if an airport at Tarras was capable of taking wide-body jets.

"Narrow-body jets that only go to Australia or domestically aren’t any use getting fruit out of the country because you end up having to pack the fruit twice."

He expected the Central cherry crop to grow to 10,000 tonnes a year, meaning the limited cargo space on passenger jets using Tarras would not be enough, requiring cherries to continue being trucked to other airports.

One of the drawbacks of chartering cargo aircraft was the need to find a backload so aircraft were not flying empty.

While it cost $2.50 per kg to export fruit on passenger aircraft, the charter cost could be $8 to $9.

"If you haven’t got a backload, then it’s very expensive."

He was not aware of other crops that would benefit from an airport at Tarras, although that might change as new varieties of sweet apricots designed to suit the Asian market came on stream, Mr Jones said.

Taiwan is the biggest market for Central Otago cherries, although there are developing markets in other parts of Asia.