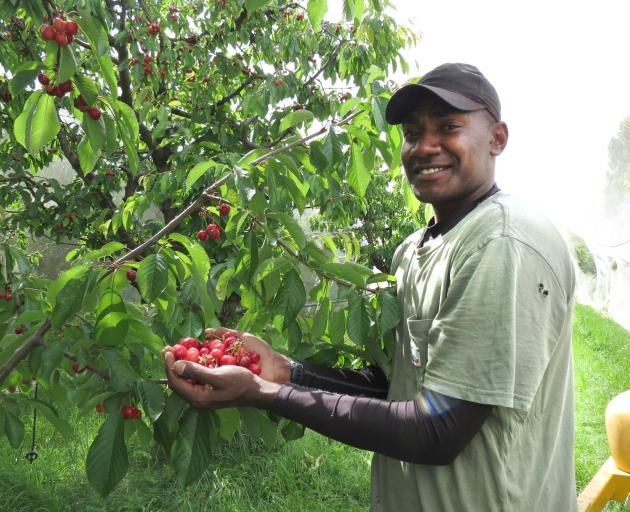 RSE worker Johnny Fraz Marongo displays some of the organic cherries he picked on Dennys Orchard in Earnscleugh. PHOTO: TRACIE BARRETT
The Central Otago cherry season is about to start in earnest with early ripening varieties available for picking from Saturday.

Orchardists are quite confident they will have enough workers to pick the crop.

Cheeki Cherries co-owner Martin Milne said his orchard in Ripponvale would be open to pick your own from Saturday and expected to continue to early February.

Pick your own accounted for the main part of his business, although the company also picked for mail-order and export sales.

The early ripening varieties, such as Burlatt, tended to be a softer fruit so more suited to the pick-your-own and domestic market, he said.

Some of the region’s premium cherries have been on Auckland shelves since last week, when picking started at Dennys Orchard in Earnscleugh.

Co-owner Dennis Paulin said they only grew about 4ha of cherries on their property, which was fully organic.

"Because we’re organic, we send everything to Auckland as that’s the biggest market," he said.

Picking of cherries for export will not begin until mid-December as the firmer, larger varieties preferred for export ripened later.

Tim Jones, chief executive of 45 South, oversees about 200ha of cherry orchards, of which about 75% of the pick was exported.

The business expected to export more than 1500 tonnes this season, primarily to markets in Southeast Asia.

A lack of backpackers and a shortage of recognised seasonal employees in the country meant hiring was a long process this season, recruitment starting much earlier than usual.

Local workers and students had picked up that slack, and Kiwis would make up 60% to 70% of workers this year, he said.